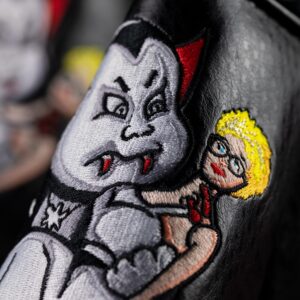 Nasty Nick will be the next Garbage Pail Kids character to get the gold head cover treatment. According to the officials GPK Facebook page, Swag Golf will be launching their third GPK character head cover next week. In keeping with the October theme, Nasty Nick will be offered as both a head cover and mallet cover. If the launch is anything like the first two, Adam Bomb and Bony Tony, collectors can expect random limited Evil Eddie variations to appear. These will sell out within mins, so collectors interested will want to keep checking the Swag Golf Instagram account and website for launch information. 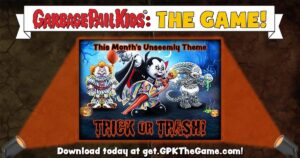 After making its debut over the weekend at NYCC, Topps has released Garbage Pail Kids Mad Mike Fury Load Volume 3 on its Yourube channel. This is the third and final installment in the stop motion animated short. The series was created by Adam F Goldberg and Jam Roll Studios. Check out the video below or at the link below! 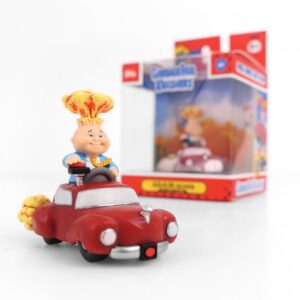 GPK collectors got another dose of toy figures for the second day in a row with the preorder release of the next batch from The Loyal Subjects. Wal-Mart is once again the exclusive seller for this round of TLS toys. There are a total of 16 new toys available for preorder today at Walmart’s website. (As of press time 4 Krasher cars are not yet listed). The toy line has 8 new figures and 8 new Krasher pull back cars. Each toy also comes with a collector card. Pricing and release dates vary slightly on the website, most figures ship in mid-December with prices ranging from $14.88-$19.96 . The figures available include, Roy Bot, Hot Head Harvey, Joe Blow, Rod Wad, Tee Vee Stevie, Geeky Gary, Weird Wendy, and Haggy Maggie. Meanwhile the Krashers available include, Adam Bomb, Blasted Billy, Nasty Nick, Evil Eddie, Messie Tessie, Leaky Lindsay, New Wave Dave, and Graffiti Petey. Here are pictures for the toys and packaging. 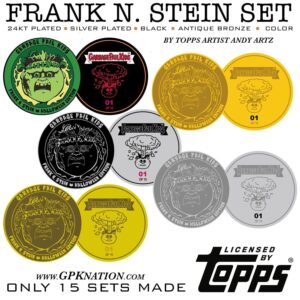 GPKNation is getting into the holiday spirt this month with their release of a series of Halloween themed licensed Garbage Pail Kids challenge coins. The company released the first character yesterday, Beth Death. There are four coins planned in the series. The second, Frank N. Stein, is set to be released today at 4:00 PM EST. All artwork on the coins was done by artist Andrew Artz. Each character pack contains five different versions of the same coin, 24k gold plated, silver plated, Black, Antique Bronze, and Color. Each coin set is limited to only /15. The company has more festive products planned this month including a special three piece pin set, with artwork by Neil Camera. Beth Death sold out yesterday, just a couple of hours after going on sale. Collectors interested in getting Frank N Stein and the others will want to follow GPKNation’s Facebook page for launch updates. 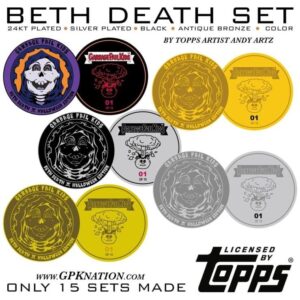 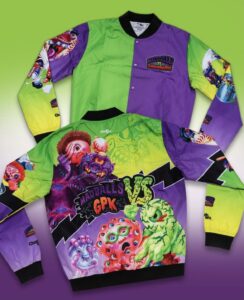 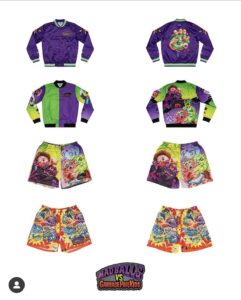 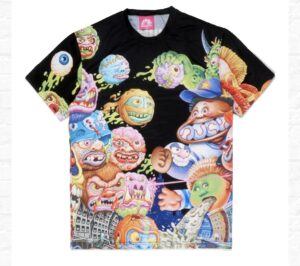 Today Mishka NYC launched a line of clothes and a blanket based on the Garbage Pail Kids x Madballs crossover. Mishka launched a number of new products after their initial t-shirt launch a few months ago. This time all the products are available on their website. First up in a 70 x 50 inch fleece blanket featuring the same Joe Simko monster box artwork that was on the t-shirt. The blanket is available for $40. The same monster box artwork is also available on a hoodie ($75) and a long sleeve shirt ($45). Two new print shirts, “Headlick” and “All Over” are also available for $49.99 each. All artwork for the shirts were also done by Joe Simko. 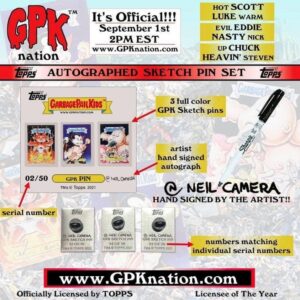 GPK Nation is back again with a new officially licensed pin offering later today. They are calling this their Garbage Pail Kids Autographed Sketch Pin Set. This three pin set is based off of sketches done by GPK artist Neil Camera for the upcoming 2021S2 Vacation set. The set includes pins for Nasty Nick, Hot Scott, and Up Chuck. The pins are individually numbered /50, each order will receive the same serial number on each pin. The backing card for the pins is also numbered and signed by the artist. If these pins sell well, collectors could see pin sets by other artists in the future. The pins go on sale later today, 9/1/21 at 2:00 PM EST. GPK Nation also continues to release multiple GPK coins every week. Be sure to check out their website for the latest. 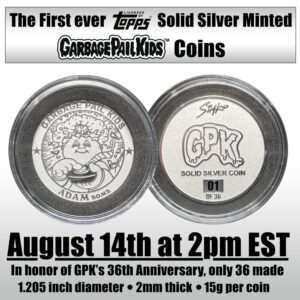 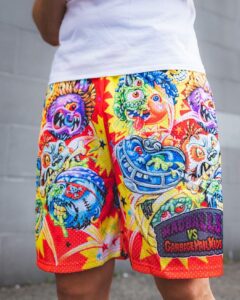