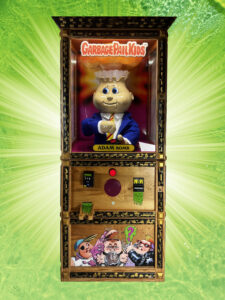 Step right up and Adam Bomb will tell you your misfortune! Topps will debut their new Adam Bomb Mis-Fortune-Telling Machine at this year’s New York Comic Con. The machine is built by the same company that built the Zoltar fortune telling machines. There is a full animatronic Adam Bomb complete with sound track. For a fee, collectors will have their misfortune told and receive a special Garbage Pail Kids misfortune card. No details on the cards or pricing are available yet. Collectors will want to be sure to visit the Topps booth (#2819) for all their misfortune telling needs. Here are the details as released by Topps: 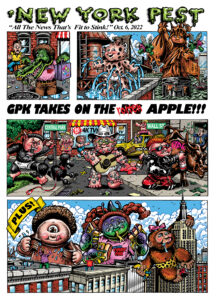 Topps today revealed the artwork being used for their Trading Card Giveaway at this year’s New York Comic Con. Collectors can collect all 9 pieces of the puzzle at various booths around the show. Once put together, the image reveals GPKs taking on New York City in a spoof of the NY Post. Artwork for the puzzle was done by artist Chris Meeks. Each booth will have a limited number of cards available each day of the show. Collectors will want to make it a priority to arrive early as these cards will go quickly. The list of booths is in the picture below. NYCC is fast approaching, scheduled to start in just 10 days taking place 10/6-10/9. 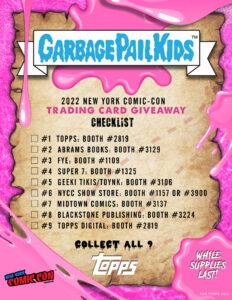 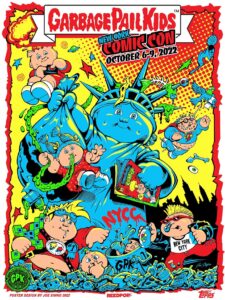 Longtime Garbage Pail Kids artist Joe Simko previewed a new silkscreen print that will be available at this year’s New York Comic Con via his Facebook account. The print features a number of GPKs in a NYCC setting. The GPK banner and NYCC logo and date also appear on the print. There will also be t-shirts of the poster available for sale at the show. The print and shirt can be purchased at the official NYCC show booths #1157 or #3900. Simko will also be on hand signing promo cards at the Topps booth Friday, 10/7 at 1:00 PM. This year’s NYCC is set to take place from 10/6-10/9. Many more Topps GPK NYCC announcements to come! 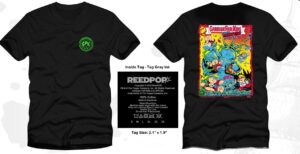 This year’s New York Comic Con is quickly approaching. Topps has big plans once again for this year’s show. Today the company announced a 9 card Garbage Pail Kids Puzzle Giveaway. This initiative matches what the company did at this year’s San Diego Comic Con. Collectors will be able to collect 9 different cards at various booths around the show. The 9 puzzle cards will form a new piece of GPK artwork with a New York theme done by artist Chris Meeks. The artwork has not yet been revealed by Topps. Cards are first come first served at the show, and proved hard to get for some at SDCC. There will once again be a limited number available at each booth, each day of the show. This year’s NYCC is set to take place Oct. 6-9. Topps has many more GPK announcements coming in the next few weeks for the show. The checklist with booths listed is below, followed by the today’s announcement from Topps. 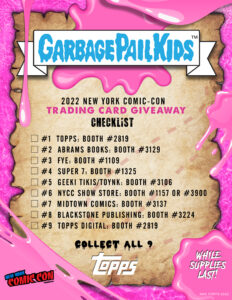 Here’s the scoop: Specific trading cards will be distributed at designated locations throughout the Javits Center exhibition hall. These locations include two separate places within the Topps booth as well as participating GPK licensing partners and select retailers. The nine different cards are available free — while supplies last. The attached checklist graphic provides the names of all participants along with their corresponding booth numbers.

“The resounding success of the GPK puzzle card giveaway we hosted at the San Diego Comic Con made the upcoming NYCCeffort a no brainer,” says Ira Friedman, head of GPK Licensing for Topps. Fans of all ages are going to have a blast chasing all nine NYCC cards, completing their puzzles, and connecting with new and long-time Garbage Pail Kids communitymembers,“ notes Friedman. 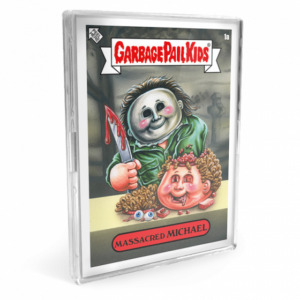 Topps today revealed the print run for 2021 Garbage Pail Kids x Comic Con Oh the Horror-ible. The set is an expansion pack to the very popular retail sets released the last few years. The set sold a total of 1,741 copies. Topps confirmed with GPKNews these numbers do not include sales of the sets at NYCC, so the print run of the base set is considerably higher. Topps did not reveal how many sets were sold at NYCC. Only the online version of the set comes with one Sepia parallel card. Based on the online print run, the Sepia’s are limited to 174 copies per card. The sales number is a very good number for Topps, considering sets were also sold at NYCC and there are no sketches offered with this one.

Update: Thanks to Topps for official pictures of the tin artwork. 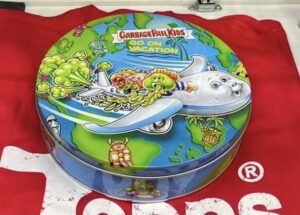 Topps is taking the kids on vacation to NYCC. This years New York Comic Con started today and Topps has plenty for GPK collectors that stop by their booth. As part of their display, Topps has examples of the box tins for the next retail set, 2021 Series 2 Garbage Pail Kids  GPK Goes on Vacation. Thanks to collector Sam Gras for sending along pictures. There are three different tins painted with a suitcase theme that will be used for the Value Boxes (Blasters). Artists David Gross, Joe Simko, and Brent Engstrom each painted one tin for the series. Artist Joe McWilliams painted a round globe themed tin which will be used for the Collector Box. After a delay of a couple months, 2021S2 GPK on Vacation is set to be released on 11/24/21.

As promised earlier this week, today Topps launched 2021 Garbage Pail Kids x Comic Con Oh the Horror-ible set. The regular set come with 10 cards, 5 new characters available in a/b versions. Each set also comes with 1 Sepia parallel card. Artwork for the set was done by Joe Simko, Brent Engstrom, David Gross, Joe McWilliams, and Neil Camera. This set is also available at NYCC. Collectors purchasing at the show will receive bonus cards. Each set can be purchased for $19.99 or in a lot of 10 for $179.99. Shipping  is free when choosing the SmartPost option. The set is only available on Topps.com for three days. Topps will reveal the print run at the end of the show. Here is the checklist along with pictures of the cards. 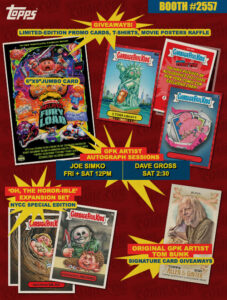 As Topps released yesterday, they have a lot in store for this weekend’s New York Comic Con. There are a number of Garbage Pail Kids giveaways and special guests planned for the event. Specific details have started coming out, collectors attending the event now have a good idea what times they need to be at Topps’ booth (#2557) to claim everything. 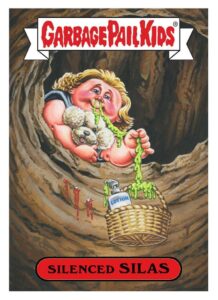 A brand new expansion set for Oh the Horror-ible will be on sale at the Topps booth during the show. The 10 card set features new artwork based on the popular horror theme. The set will also be available online later in the week on Topps.com. Collectors who purchase the set in person at NYCC will also receive two bonus cards, Buff Bill and Silenced Silas. Pricing for the set has not been revealed as of yet. 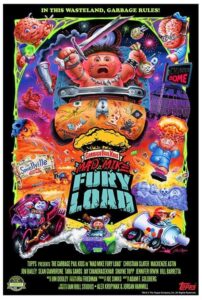 Topps will also have a number of free cards at the show. GPK artist Joe Simko will be at the Topps booth, Friday 10/8 and Saturday 10/9 at 12:00 PM, signing 6” x 9” movie poster cards featuring artwork based on the Fury Load animated shorts. Collectors also will have the chance to enter a contest each day of the show to win a large scale version of the movie poster. They also can be the first to see part 3 of Fury Load at Topps’ booth Saturday at 12:00. Collectors not at the show will have to wait until Monday’s release of the video on Topps’ Yourube channel. Also making an appearance the same time as Simko’s booth appearances will be none other than Adam Bomb! Kids and adults alike can take pictures with the GPK icon.

Artist David Gross will be at Topps booth Saturday 10/9 at 2:30 PM signing a reconfigured Food Fight card, Max Wax. He will also be at the 4 Real Breaks booth at 3:30 PM busting GPK packs and doing a short Q & A session.

Topps will also be promoting the upcoming GPK Goes on Vacation with a special Lydia Liberty card. The first 250 collectors to participate in Topps Interactives at their booth on Saturday 10/9 will receive a copy of the card. Topps is also planning giveaways for t-shits, Tom Bunk autos, and more. 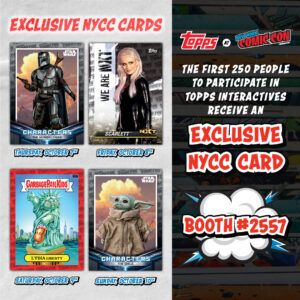 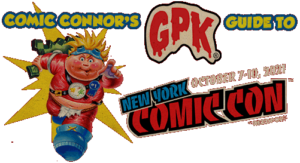 The return of cons around the country includes this weekend’s annual New York Comic Con. Topps has big plans for the event, with many of them involving the Garbage Pail Kids. Today, Topps shared details of everything they have planned for the con. Topps will be selling a new mini set at the show based off of previous Oh the Horrible releases. Topps is planning on also offering the set online to collectors later this week. While Topps hasn’t yet revealed details, there are plans for an exclusive promo card to be given to collectors who purchase the set at NYCC. There will also be other GPK promo cards available at Topps booth. Topps doesn’t spell out what will be available each day, but artist Joe Simko will be at the Topps booth (#2557) Friday and Saturday at 12:00 PM, while artist David Gross will be there Saturday at 2:00 PM. Both will be signing cards at the show. Topps also said there will be giveaways of Tom Bunk autos, tshirts, and movie posters. Speaking of movies, the debut screening of part three of the Fury Load trilogy will take place at Topps booth on Saturday at 12:00. Expect the animated short to debut online shortly after. A virtual panel featuring many of the GPK licensees is schedule to take place virtually on Thursday 10/7 at 10:00 AM. Schedule to take part are Mishka designer Mabel Garcia, author RL Stine, artist Joe Simko, and Fury Load producer Adam F Goldberg. Finally, Adam Bomb himself will be making an appearance after a two year absence. Collectors will get that chance to take their picture with the GPK icon. GPKNews will bring you more details on cards and giveaways as more detail emerge. 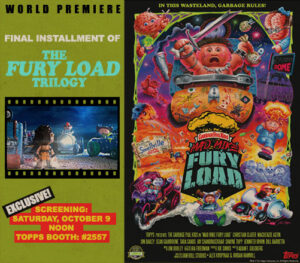 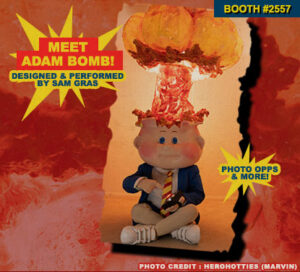 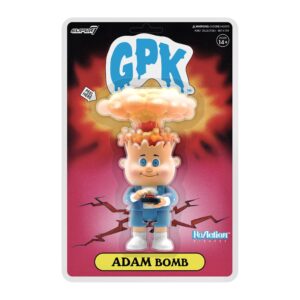 Like all other comic cons this year, New York Comic Con was cancelled and moved to a virtual event. Super7 launches their special Stay-At-Home-Ic-Con today on their website. The highlight for GPK collectors is the Garbage Pail Kids Reaction Figure Adam Bomb. The figure measures 9x6x1. It can be purchased for $20 plus shipping, there is a 2 figure per customer limit. Super7 also debuted a new long sleeved Adam Bomb tshirt. The shirt features the GPK logo on front, with Adam Bomb going up both sleeves. The short is available for $40 in sizes S-3xl. Order now before these special Virtual NYCC items sell out. 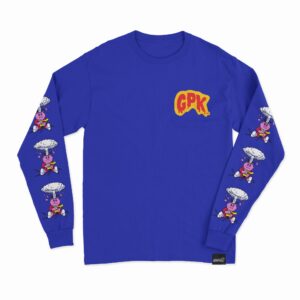 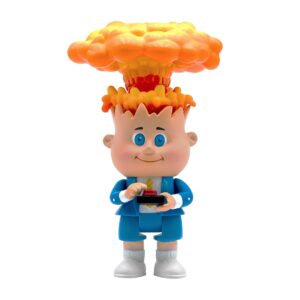