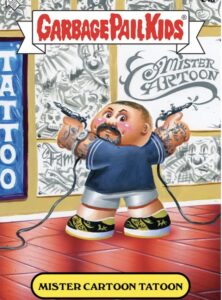 The 2021 virtual art show, Beyond the Streets is returning and once again will feature Garbage Pail Kids. The show, which is scheduled for 12/1-12/2, is a celebration of graffiti and street art. Not much is known about the set yet. According an article in Men’s Journal, the show will once again offer a Garbage Pail Kids set with artwork done by the featured street artists. The article says, “Some product highlights include a new series of Garbage Pail Kids designed and inspired by the likes of Cleon Peterson, Maya Hayuk and Mister Cartoon.” The included card example looks to be a GPK rendition of a street artist, instead of the artists doing classic GPKs like they did in 2020. Once again the show will be exclusively on the NTWRK mobile app. The app currently has a place holder for the GPK sale set for 12/1/21 at 12:00 PM EST. No other information is available about the set. Much more to come in the coming days for this event. 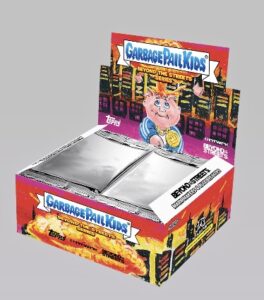 Today NTWRK launched Beyond the Streets X Garbage Pail Kids set. The set was created for the Beyond the Streets virtual art fair taking place this weekend. 48 street and graffiti artists created renditions of their favorite GPKs. The set is being sold in box and pack form. Each box comes with 24 8-card packs, or 10-card packs. I’m not sure because the listing shows both. The listing also advertises the box could contain a special Adam Bomb chase card created by KC Ortiz and limited to 100 copies. It’s unknown how large the set is, the example cards show all are numbered “a”, however no examples of “b” cards are shown. The boxes went on sale today, 12/5 at 5:00 PM EST., and will remain on sale only until Sunday 12/6 at 10:00 PM EST. Each box can be purchased for $100 on the NTWRK app, which is available for both iPhone and Android devices. Below are pictures of the cards. 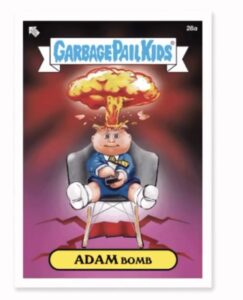 Beyond the Streets art fair has partnered with Topps on a new Garbage Pail Kids set that will debut this Saturday. Beyond the Streets is a virtual art fair made up of street and graffiti artists. According to their Instagram account, the set will feature 48 cards all painted by a host of artists involved in the art fair. The cards will be sold by the box beginning this Saturday, 12/5 at 2:00 PM PST, the sale will last only until Sunday 12/6 at 7:00 PM PST. The cards are being printed on demand. The cards will be sold on the NTWRK app. Here are some sample cards. More cards including a list of artists can be found on their Instagram. 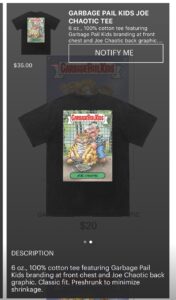 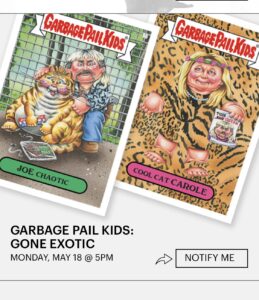