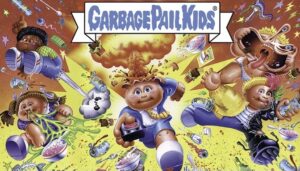 According to The Hollywood Reporter, there is a Garbage Paul Kids animated series currently in development. The series is being developed for the streaming service HBO Max by Topps and Rough House Pictures. Danny McBride, David Gordon Green, and Josh Bycel will write and co-create the series.

During the height of popularity in the 1980’s a GPK animated series was planned, but never aired due to the controversial nature of GPKs at the time. The article reports the new series is expected to be a family friendly.

GPK artist Joe Simko posted on Facebook that he had been asked to help create character designs for the show. No other details have been released on the series as of yet. Garbage Pail Kids are about to get back into the mainstream.