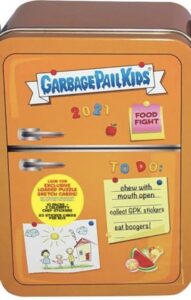 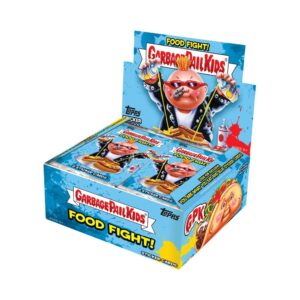 With the release of 2021 Series 1 Garbage Pail Kids Food Fight just over a month away, images for the packaging have begun appearing online. Steel City Collectibles has updated some of their sales listings with images of the retail packaging. Both the Retail Display box and Fat Pack packaging are shown. This set’s mascot is New Wave Dave who is using his yellow spray paint on the hot dogs. The boxes themselves advertise the expected parallels to search for inside, Blue for Retail Display and Purple for Fat Packs. Collectors will be able to find 2021S1 GPK Food Fight in stores 2/24/21. 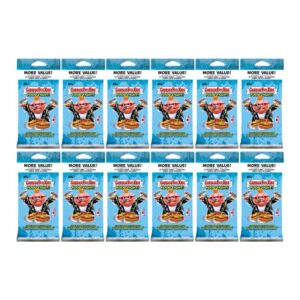 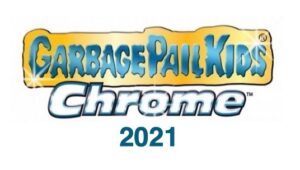 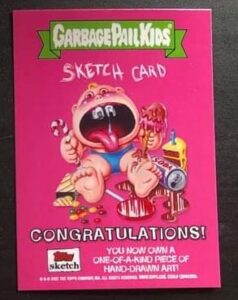 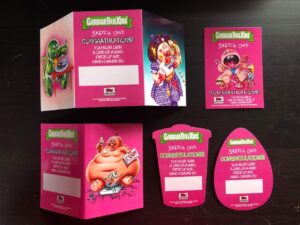 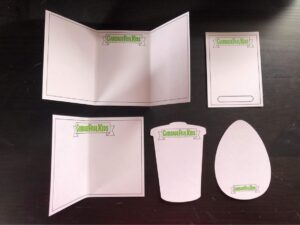 Just over a week ago Topps announced the first set of 2021, Series 1 Garbage Pail Kids Food Fight. New information sent to distributors today shows Topps is making changes to the info on the sell sheet. The retail sell sheet had information on it about collectible Refrigerator Tins that would be the packaging for Value “Blaster” Boxes. There will indeed be 4 different lids on these boxes. However, due to the special boxes, the configuration of the Value Box is different than what Topps originally sent to distributors. Value boxes for 2021S1 will contain double the packs of what collectors are use to. Value Boxes will come with 10 retail packs. The boxes will continue to contain only 1 pack of 3 Celebrity Chef insert cards. Despite the changes, Value Box cases remain at 40 boxes. Topps is also raising the MSRP of Value Boxes. The original price sheets had the MSRP for Value boxes at $10.99, the new configuration will be set at $22.00.

Yesterday saw the release of the Hobby sell sheet for 2021 Series 1 Garbage Pail Kids Food Fight. Today we bring you the Retail Sell Sheet. The first set of 2021 will see a familiar format to recently released sets. The 200 card base set features all new art work on fronts and backs of cards.

Retail Display Boxes return once again and have the same setup at the 35th anniversary set. Every retail pack contains 1 Booger Green parallel card. Spit in Your Food Blue parallels will also be randomly inserted in Display Boxes and numbered /99. You Are What You Eat insert cards, featuring GPK characters as food, will also be found only in Display boxes. Fool’s Gold parallels (/50), Printing Plates, Artist Autos and regular size sketches can also be found in all pack types.

Five pack Value Boxes are also back with the same setup as previous sets. Mustard Yellow parallels can be found 1:5 Value Box packs. The Celebrity Chef insert set, featuring famous chefs as GPKs, will come 3 per Value Box in their own clear wrapper. Loaded Puzzle and Panoramic sketches will also only be found in Value Boxes. The sell sheet also advertises that Value Boxes will be packaged in collectible refrigerator tins. There will be 4 different tins to collect.

To view the retail sell sheet click here, or see below for pictures. 2021 Series 1 Garbage Pail Kids Food Fight is set to hit store shelves on 1/20/21. 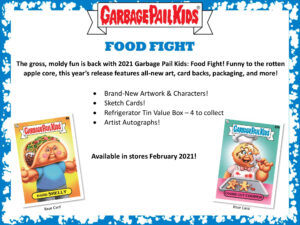 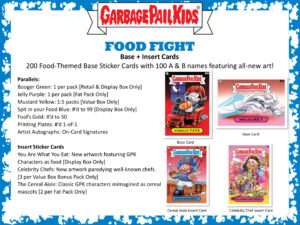 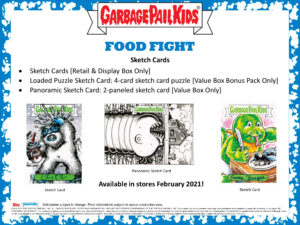 Topps has a lot left on its plate in 2020 as they celebrate the 35th anniversary, but that doesn’t mean plans don’t continue for the future. Today Topps announced 2021 Series 1 Garbage Pail Kids Food Fight. The first retail set of 2021 will contain 200 base cards, 100 with a/b versions. Topps advertises there will be all-new art and cards backs. They do not go into any details on the theme of any base cards. The familiar parallels collectors are use to will return. Retail packs will contain Booger Green parallels at one per pack. Retail display boxes are also set to have Spit in Your Food Blue parallels /99 randomly inserted. Pepper Black, 1 per pack, and Saucy Red /75, can be found in Collector packs. Fool’s Gold parallels /50, artist autos, and printing plates will continue to be found in all pack types.

Insert sets planned for the new set include; You Are What You Eat, GPK characters as food, (Display Boxes), GPK Food Wacky Packages (Collector), Wacky Package Patch Cards (Collector), and Mini Magnets, 24 total (2 in each Collector bonus back). Regular sketch cards can be found in retail packs, while shaped sketches (Trash Can & Rotten Egg) and Triptych can be found in Collector boxes. The sell sheet also advertises there will be a collectible refrigerator tin.

You can view the sell sheet here in PDF form here, or see below for pictures. 2021 Series 1 Garbage Pail Kids Food Fight is scheduled to hit stores 1/20/21. 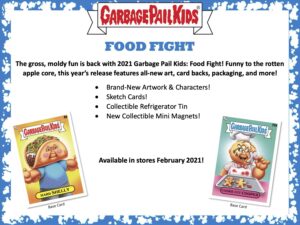 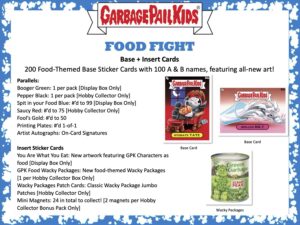 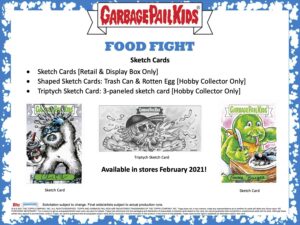