Beyond just being the start of transition for the brand, 2018 saw many GPK highlights for collectors. Both retail sets released in the US were well received by collectors overall. 2018 saw the first European retail releases by Topps Europe in a decade. The licensing arm of Topps remains in full force as collectors saw the GPK license continued to used throughout the year with a variety of new merchandise to enjoy. Collectors once again had a lot to be excited about in 2018. But what stood out as the best in GPK for 2018?

Its time for the 2nd annual 2018 GPKNews.com Best of GPK Awards! Winners have been selected by the editor of GPKNews.com in seven categories. Additionally, a Reader’s Choice winner was also named in each category. Readers of GPKNews were able to vote in a poll on GPKNews’ Facebook page in mid-December. On some awards there is agreement, while others vary in opinion. Let the debate begin! Its time to celebrate the best in GPKs for 2018!

Before we get to the awards its time to announce the winner of GPKNews voting contest. Everyone who entered a complete ballot was entered into a drawing for an unopened box of 2018 UK Garbage Gang! Congrats to Nick Fajardo for winning the box! Without further ado…

There was a clear winner in this category in 2018. 2018 Series 2 Oh the Horror-ible in some ways was a love letter from GPK artists to their fans. The horror theme not only resonated with the artists, but also with most GPK collectors. While the artists always spend ample time creating new cards, the time and thinking put into the last set of 2018 was unprecedented. Hundreds of gags were submitted to Topps from the artists for this set. This resulted in a set filled with many memorable cards that both GPK collectors and horror fans enjoyed. The set also saw the introduction of the purple Jelly parallel inserted into retail fat packs. Collectors took a liking to those, and the purple parallel set was one of the more chased parallel sets in recent memory. 2018S2 Oh the Horror-ible will be tough to top in 2019.
Honorable mention: 2018S1 We Hate the 80’s, 2018 UK Garbage Gang, 2018 Italy Sgorbions 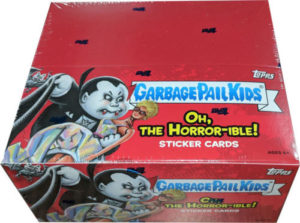 When it comes to online GPK sets there was a sharp decline in what Topps offered collectors in 2018, especially in the second half of 2018. Topps started off the year with the usual suspects, awards sets, followed by comic convention sets and holiday sets. However it become obvious in the later part of 2018 that Topps started changing direction and begun experimenting with their online offerings. Those second half of 2018 offers is what stood out in collectors minds. The clear winner in the category was a set based off of the hugely popular Netflix Show, Stranger Things. Painted entirely by artist Joe Simko, Stranger Kids was first offered at this years New York Comic Con. People attending the show could purchased the “A” set or the “B” set for $20 each. People buying both sets got to choose one of four Comic Con exclusive bonus cards. Because of the scarcity and hard to obtain nature of the bonus cards, demand skyrocketed in the weeks right after the show for the bonus cards. In true Topps form, a mistake led to distribution of a fifth bonus card early on the first day of the show. Very few copies of the card, Topps did not have permission to distribute, were handed out and are now very rare collectors items. After the show was over Topps begun selling both the “A” and “B” sets on their website for 90 days. At press time the sets still remain for sale, so total print run information has not been made available. The artwork and frenzy for the bonus cards made this the most popular online set in 2018.
Honorable mention: 2018 On Demand GPK Meme, 2018 GPK Summer Comic Convention, 2018 GPK Hall of Lame. 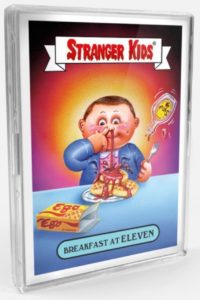 For the second year in a row Creepy Co. wins the award for the licensee of the year. The company continued to release a steady stream of merchandise throughout the year. Mainly sticking with t-shirts, the company cooled on the idea of offering pins, but still offered up some innovating merchandise. They teamed up with Topps at SDCC to offer exclusive lanyard and pin. They finished the year offering an Adam Bomb desk light in a collectible OS 3 themed box. They had some strong competition from Funko, who begin offering GPKs in their standard POP line of figures. As well as from Fright Rags who offered a wax wrapper set with shirt, pin and card. Can Creepy Co. make it three in a row in 2019? With GPK the Game set to launch in 2019, as well as other merchandise sales, competition will be tight.
Honorable mention: Funko, Fright Rags.

2018 saw Topps put the brakes on new sketch artists for the first time in years. The last three years saw the number of sketch artists increase substantially. In 2014 there were a dozen sketch artists. Retail sets now routinely feature almost 60 artists. However, Topps seems to have a steady bank of artists, and are now just replacing the few that drop out each set. 2018 saw only 8 new sketch artists make their debut on the GPK brand. All 8 did a fantastic job with their debut sets. There is no right or wrong answer for this category. The readers proved that with their voting. This year’s Rookie Sketch Artist of the Year is Shawn Cruz. Shawn integrated himself effortlessly into the GPK sets. His full color work on retail sketches were a welcome sight for collectors. His has done numerous personal sketches and GPK theme character work for clients. He’s also active in the comic con scene in the pacific northwest. Shawn will be a welcome addition to GPK sets for many years to come.
Honorable mention: Quinton Baker, Simon Jacobsohn, Emma Burges, Ande Moores. 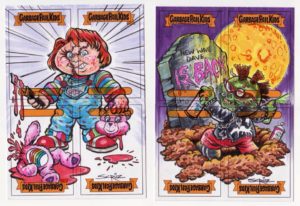 This is another category where it’s nearly impossible to pick a winner. A seemingly impossible 72 artists completed sketches for GPK sets in 2018. this year both 2018S1, 2018S2, and the On Demand Meme set featured sketches. This is another category where readers have their favorites. In addition to the nominees there were 10 other artists who received votes. This year’s sketch artist of the year is Smokin Joe McWilliams. Smokin Joe has quickly become a favorite of collectors since starting with the GPK brand on the 2017S1 set. His attention to detail really shows on his pack inserted sketch work. Collectors constantly pay top dollar for his sketches, and Joe quickly sells out of sketch returns each set. Joe’s work was featured in all three sets that offered sketches this year. Despite clearly being busy with sketches and final artwork, his consistent quality is what stood out among collectors, and what makes Smokin Joe this year’s Sketch Artist of the Year.
Honorable mention: Michael Barnard, Pat Chaimuang, Jason Heil, Rory McQueen, Steve Potter, Neil Camera, Lowell Isaac. 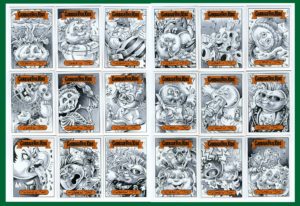 2018 saw 12 different artists paint final cards for GPK. However, one thing you notice right away, compared to 2017, there were a lot less cards made. This is because of the sharp decline in both daily and monthly online sets. Still, the artists were kept pretty busy. It’s always interesting to look at how many cards each artist did. Here are the top 5 artists based on number of completed GPK cards.

These numbers include both retail and online cards. They do not include any Wacky packages cards that were part of online sets. Once again you will see the same names completing the most cards. However, you’ll notice Smokin Joe creep in at number 5 for the year. I’m willing ti predict there will be more change to this list in 2019. This is another category that’s really hard to pick. GPKNews has chosen David Gross as the 2018 GPK Artist of the Year. David’s strong suit has always been gag writing, and this year was no exception. He is able to write/draw gags that are both simple to understand, while remaining entertaining. A number of his cards in both retail sets stood out in 2018. David has also been a big supporter of the collector behind the scenes with Topps. His work with both the old and new GPK leadership will hopefully lead to some changes in 2019 that collectors will certainly enjoy.
Honorable mention: Brent Engstrom, Joe Simko, Smokin Joe McWilliams, Neil Camera. 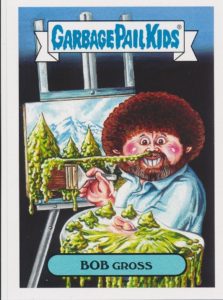 There were almost 300 different GPKs released by Topps this year, so collectors had a lot to choose from in this category. Voting for this category was the most diverse of any of the categories. All the nominated cards received ample votes, while the top three were separated by only 3 votes. It’s fitting that the winner of this category come from the most popular set of the year, 2018S2 Oh the Horror-ible. All the artists really worked hard on this set, and the results showed. There are a number of cards that will end up being memorable from this set. There were a lot more that could have easily been nominated. This years card of the year goes to Joyless Jason #7a in the 80’s Horror subset. The card features perhaps the most popular horror character in history. Jason is looking at a calendar and is clearly disappointed that this month the 12th falls on a Friday. It’s a simple to understand gag, while putting a funny spin on the iconic character. These are the things that will make the card memorable to collectors for years to come.
Honorable mention: Pin Ed, Bob Gross, Stranger Kids Poster, Mad Paul, Hallow Dean. 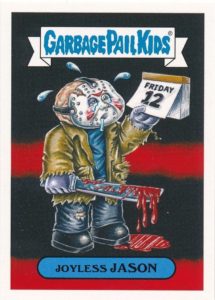