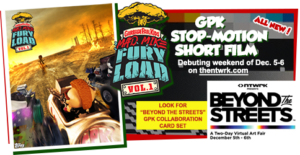 Topps today sent out their newsletter promoting everything Garbage Pail Kids that’s currently for sale. And wow it’s a lot! Visiting this link sends customers to a website with a complete rundown.

The first item listed advertises the brand new stop motion animated video, done in collaboration with Jam Roll Studios and Adam Goldberg. Mad Mike Fury Load Vol. 1 is set to debut this weekend on theNTWRK app during their Beyond the Streets art fair event. The video is based off the recent GPK Krashers card set. According to the app, the GPK event is scheduled for Sat 12/5 at 2:00 PM PST. There is also advertised a Beyond the Streets Garbage Pail Kids card set will be offered soon. 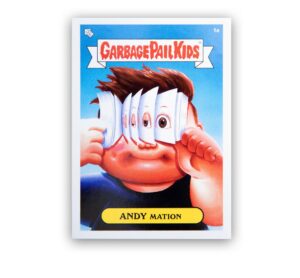 Andy Bailey, the popular YouTube flipbook artist, has posted part 2 of his Garbage Pail Kids Flipbook video. In part 2 Andy creates two different Flipbooks based on Meltin Milton and Bony Tony. Joe Simko makes an appearance in the video, as he is the one who colors the flipbooks. Andy also tries out the FYE GPK hot sauces. Part 1 of the video has turned out to be very popular with over 2.8 million views already. 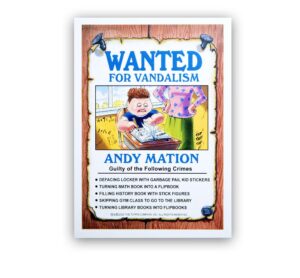 As part of the collaboration with Topps on these videos, they turned Andy into a GPK. Artist Joe Simko painted the Andy Mation card. Topps printed 1500 copies of the card. Andy has signed the backs, and will be selling the cards via his website for $5 each. 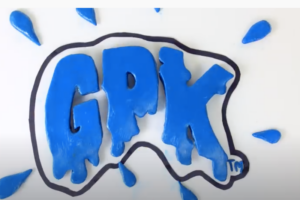 Who doesn’t love flip books? Andy Bailey is not only a stop-motion animator, but is also a huge Garbage Pail Kids fan. He runs a very popular Youtube channel, Andymation, filled with flipbook videos. You remember those, right? The final few OS sets featured comics on the cards backs that could be used as flipbooks. Topps has partnered with Andy on this video project. Today the first of a two part video was posted to his channel. In part 1, Andy is busting boxes of GPK searching for the flip books, and eating the gum. Check it out at the link here! Part two will be coming soon where he creates his own GPK flipbook.