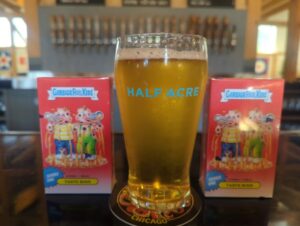 Garbage Pail Kids Taste Buds Series 1 begin showing up this week at the 20 breweries who were part of the set. Thanks to collector Billy Adam for info and pictures of the cards. Billy visited the Half Acre brewery where they just received the cards from Topps. Instead of complete sets, the breweries have 10 card + 1 Gold parallel packs. Each brewery pack comes in a themed Taste Buds box with an inner silver sales pack. The box also has the list of breweries on the back. These are the same packs that were sold online to collectors. While the online packs cost collectors $20, this brewery was selling them for $10 each. 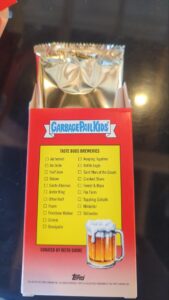 This brewery received 500 packs to sell locally. This is the number GPKNews had also heard a few weeks ago. If each brewery received 500 packs that would put the brewery packs at 10,000. After including online sales, it puts the total pack run at 13,382. That comes out to 3,263 complete sets that can be made from these packs. It would put the each gold parallel at 326 copies. Quite a high print run for a niche GPK set. GPKNews can also confirm that artists will be starting work shortly on Taste Buds Series 2, set for release later this summer. 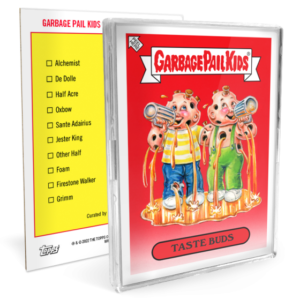 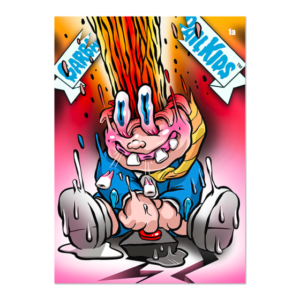 After ending earlier today, Topps revealed the print run for 2022 Topps GPK: Complexland Skateboard Deck Stickers. The set sold a total of 1,301 copies. This is right in line with recent online sales of the 90’s expansion sets. The print run means the 1 per set “b” name cards will be limited to 130 each. This was the followup series to Rory McQueens’ very popular skateboard sticker set from 2020. This series outsold the first by nearly 300 copies. Skateboarding and GPK continue to be a match for collectors

Topps is once again partnering with the virtual lifestyle con, Complexland, to offer a sequel to a very popular online set. Today Topps launched 2022 GPK Complexland Skateboard Deck Stickers. The set is the second GPK skateboard sticker set from artist Rory McQueen. The set features 10 “a” name cards of popular GPK characters redone in a skateboard theme. Each set also comes with one alternate color “b” name variant. There are once again no name plate or banners on the front of the cards. The set can be purchased for $19.99. Shipping is free when choosing the Economy/SmartPost option. The set is available on topps.com for 7 days. Topps will reveal the print run at the end of the sale. Here is the checklist along with pictures of some cards. 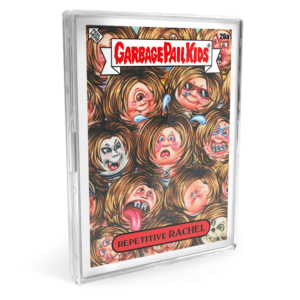 Topps first GPK expansion series of the year has come to a close. Did you get them all? Topps today revealed the print run for Garbage Pail Kids We Hate the 90’s Expansion Set week  6. The set sold a total of 1,095 copies. This is down almost 100 from last week, and is the lowest selling set of the six week series. Topps still has to be happy with sales results with all sets going over the 1,000 mark. Topps has multiple expansion sets based of previous releases planned for the rest of 2022. Expect to see a short break before the next expansion series is launched. 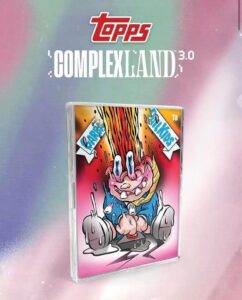 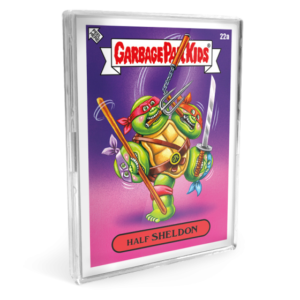 After ending earlier today, Topps revealed the print run for Garbage Pail Kids We Hate the 90’s Expansion Set Week 5. The set sold a total of 1,185. This is down over 100 from the week prior. Last week’s set saw Topps throw up a few hurdles. Many collectors trying to order the set on an Android phone we’re unable to purchase the set. Topps also launched the Taste Buds set the same day. The sales however were third highest for the expansion set and continue the good results. Only one week remains in this first expansion set.

Today Topps launched Garbage Pail Kids We Hate the 90’s Expansion Set week 6. This is the 6th, and final, weekly set extending the popular retail set focusing on everything 90’s. This week’s set contains 10 cards, 5 new pieces with a/b versions. Each set ordered also comes with one sepia parallel card. Artists David Gross and Brent Engstrom did all the artwork for the set. The set can be purchased for $19.99. Shipping is free when choosing the Economy SmartPost option. The set will be available for 7 days on Topps.com. Here is this weeks checklist along with pictures of the cards.

26A Repetitive Rachel
26B Copy Kat
27A Reese Yded
27B Planet Paul
28A Retch Up JEFF!
28B Gross GREG
29A Disgusting Dexter
29B Experiment AL
30A Slow Loading Lonzo
30B Dial Up DOUG 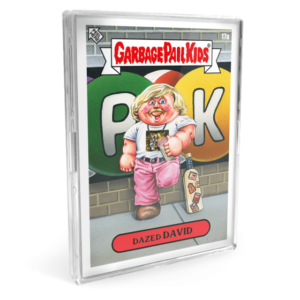 Maybe it was Brittany Spears or maybe Matthew McConaughay, but collectors showed up to purchase last week’s 90’s themed set. After ending earlier today, Topps revealed the print run for Garbage Pail Kids We Hate the 90’s Expansion Set week 4. The set sold a total  of 1,318 copies. This is over two hundred more than last week’s set. So far all four weeks of the set have done solid sales numbers as the sales more into the home stretch with just two weeks remaining.

After teasing the set earlier in the week, today Topps launched Garbage Pail Kids Taste Buds Series 1. The set features various owners of craft breweries around the world as GPKs. The set is curated by Topps Project 70 artist Keith Shore, who is also involved with one of the brewers, Mikkeller. Instead of gags focused on beer or the company’s logos/mascots, artists were asked to draw the owners and their personal likes as GPKs. The first set in the series features 20 breweries. Each brewery is available in an a/b version, plus a checklist card for a total of 41 cards in the set. Topps is selling a pack of 10 cards, plus one gold parallel card. Which means collectors will have to purchase multiple packs to complete the set. Each pack can be purchased for $19.99, 5 for $94.99, 10 for 179.99, or 20 for $319.99. Shipping is free when choosing the Economy/Smart Post option. The set will be available on Topps.com for 30 days. Additionally, each of the participating breweries is expected to have a number of boxed complete sets available for purchase. There is no information yet on set structure. quantity, or pricing for sets sold in breweries.