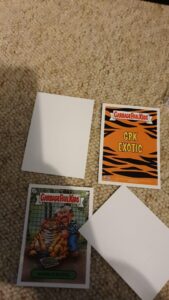 Collectors began receiving their Garbage Pail Kids Gone Exotic sets in the mail this week. However what they saw, wasn’t as expected. The first sets to be opened up had a set of cards with blank backs, and another set of cards with blank fronts. This odd error appears to only happen with sets that were shipped first. Collectors opening up sets later in the week confirmed their cards were printed correctly. GPKNews reached out to Topps for comment on the error. According to a Topps spokesperson, the problem was not wide spread. Collectors who didn’t receive the correct set can contact Topps customer service to request a  replacement. There is no word on exactly how many error sets were printed by Topps. Based on posts online it appears most of the error sets were shipped to European collectors. These error sets will surely fetch a premium price on the secondary market. 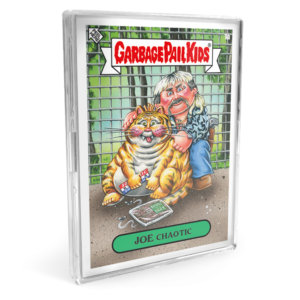