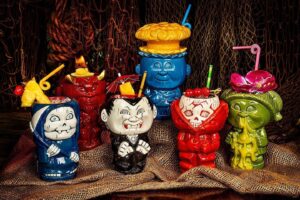 Beeline Creative’s second series of Garbage Pail Kids Geekitiki Mugs are now available for preorder at ToyNK.com. Nasty Nick, Grim Jim, and Hot Scott make up the next three ceramic mugs. They range from 20-22 oz. Each mug can be preordered for $34.99. According to the website the mugs will be available on 12/15/20. There is no mention of a free promo card with these mugs like the first series. 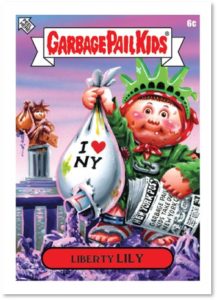 With this years New York Comic Con just a couple of days away, Topps has been quiet about what they will have in store at the show. Today via his Facebook page, Garbage Pail Kids artist Joe Simko showed two cards that will be part of the GPK Takes Over NYC set. Joe Simko painted 11 new pieces for the set. There will be an “A” names set, a “B” names set, and a “C” names set featuring New York themed names. The cost for the set is currently unknown. Topps has also announced the set on their blog. They mention the purchase of the set will include a special bonus card, while supplies last. Topps also mentions there will be a GPK promo card available Saturday at the show. 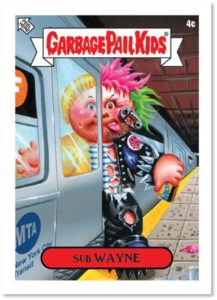 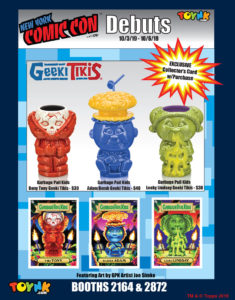 With less than two weeks until this year’s New York Comic Con, details are starting to come out on some of the Garbage Pail Kids items that will be available. One of the most anticipated licensed items in recent memory will debut at NYCC. Beeline Creative will have will have three new Garbage Pail Kids Geeki Tikis. Famous GPK characters have been made into ceramic mugs based to look like a tiki. There will initially be three mugs offered; Adam Bomb, Bony Tony, and Leaky Lindsay. A spokesperson for Beeline has confirmed with GPKNews that each mug purchased will indeed come with its exclusive card. The art for each card was completed by Joe Simko. Adam Bomb will be priced at $40, while Bony Tony and Leaky Lindsay will be $30 each. In news that will please many collectors, Beeline told GPKNews that these are debuting at NYCC, and there will be limited quantities available after the show. Collectors can purchase the Geeki Tikis at either of the Toynk booths (#2164 & #2872). Sometime after the show they will be available on the toynk.com website. This is only the beginning for Beeline’s license with Topps. The company said there will be more characters released in the future.

Update 9/19: Beeline Creative has posted the 3rd Card in the series, Luau Lindsay. 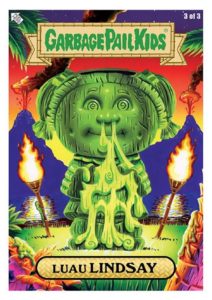 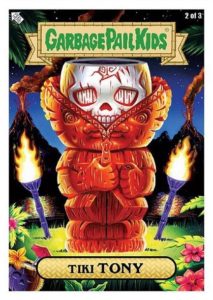 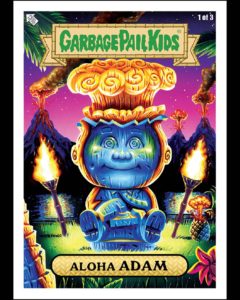 Tonight on their social media channels, Beeline Creative began teasing the long rumored Garbage Pail Kids Geeki Tikis they will be offering at this year’s New York Comic Con. Today’s post makes it appear the Tikis will come with cards! Card #1 of 3 is shown titled Aloha Adam. It’s Adam Bomb done as a tiki. The artwork for the card was completed by Joe Simko. An Adam Bomb, Leaky Lindsay, and Bony Tony are being planned for release at NYCC. I’m sure there will be more previews coming soon. 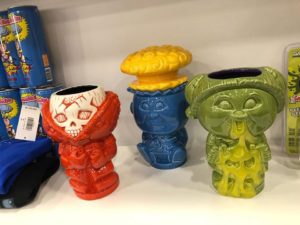