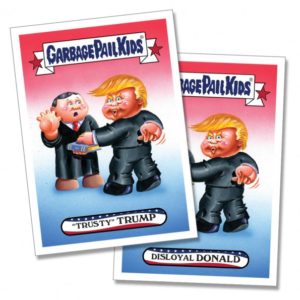 To help celebrate(?) the inauguration of Donald Trump, Topps released a special one time parody set. Moving past the Disg-Race series, Topps decided to do a separate set with both GPK a/b cards, and Wacky Packages cards. Today Topps revealed the print run for Garbage Pail Kids American as Apple Pie Presidential Inaug-Hurl Ceremony. All cards in the set drew similar sales numbers from the mid to upper 200’s. Here are the final print run numbers for each card printed. 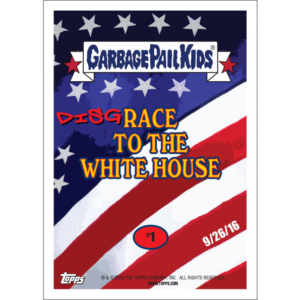 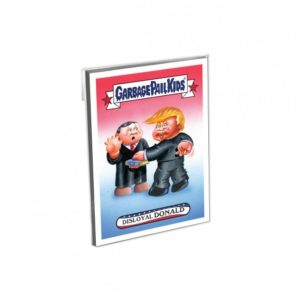 While its not clear if the Disg-Race to the White House set is finished or not, that won’t stop Topps from making the Trump cards. Today Topps launched 2017 Garbage Pail Kids American as Apple Pie In Your Face Presidential Inaug-Hurl Ceremony online set. The set falls under the Apple Pie banner, as opposed to the Disg-Race label. The set is comprised of 8 new GPK paintings, available as a 2 card a/b set, and 3 Wacky Packages cards. All cards are based off the president’s inauguration last week. Each a/b GPK card, or Wacky card can be purchased for $9.99. The entire 19 card set can be purchased for $49.99. Free shipping is available via the SmartPost option. The cards will be available on Topps.com for 7 days. Topps will reveal the print run at the end of the sale. Here is the checklist and pictures of the new cards. 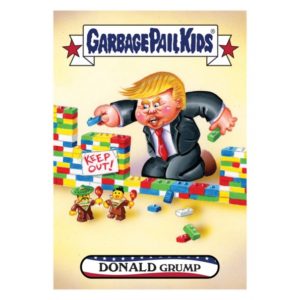 Topps got some good news with the third presidential election release of the week as sales were up for the week. Today Topps revealed the print run for Garbage Pail Kids Disg-Race to the White House cards #150-#152. As usual the Wacky Packages card led the way with sales with 370. Sales of the GPK cards were slightly higher, especially with card #151. The card, featuring Legos and Trump, finished with 339 in sales. It’s expected today’s presidential inauguration will mark the end of the Disg-Race set. Look for Topps to possibly release one more set based on today’s festivities. Here are the final numbers for the third release this week. 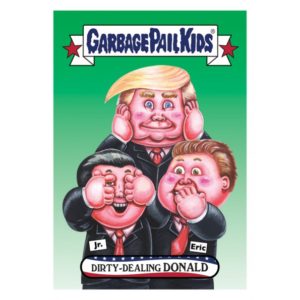 In what looks to be the final week of releases for the presidential election sets, Topps is going full steam ahead. Today Topps revealed the print runs for Garbage Pail Kids Disg-Race to the White House cards #147-#149 and Network Spews #3. The second online release this week faired only slightly better than the previous day’s cards in sales. While no record lows were set, the GPK cards stayed in the mid 200’s sales wise, including the Network Spews card. The Wacky Packages card did rebound with 342 in sales. All indications are the Disg-Race set will finally wrap up after the inauguration on 1/20. Here are the final numbers for the second online release of the week. 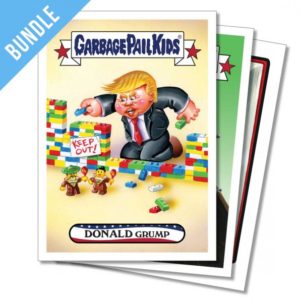 Sticking to their regular online launch schedule, Topps is back at it for the third straight day with the presidential election cards. Today Topps launched Garbage Pail Kids Disg-Race to the White House cards #150-#152. There are only three new cards today, two GPK and one Wacky Packages card. As usual each card can be purchased for $9.99 or in lots of 5 for $29.99, 10 for $49.99, or 20 for $79.99. A three card bundle feature one of each card can be purchased for $24.99. Free shipping is being offered via the SmartPost option. The cards will be available for sale for 24 hours on topps.com. Topps will reveal the print run of the cards at the end of the sale. Here are pictures of today’s offerings. 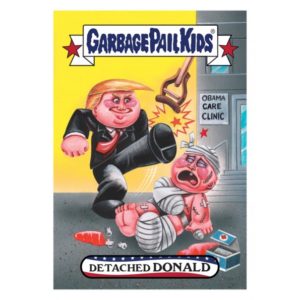 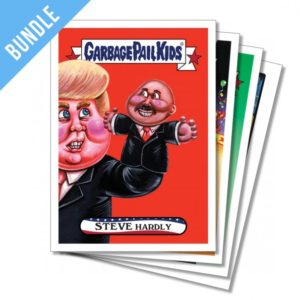 It’s Wednesday and Topps is sticking to their usual online release schedule with the second batch of presidential election cards this week. Today Topps launched Garbage Pail Kids Disg-Race to the White House cards #147-#149. Today’s cards feature two GPK cards and one Wacky Packages card. For the second day in a row Topps also launched Garbage Pail Kids Networl Spews card #3. Today’s card is focused on the recent news of closing of the circus. Each card can be purchased for $9.99 or in lots of 5 for $29.99, 10 for $49.99, or 20 for $79.99. A four card bundle featuring one card of today’s new offerings can be purchased for $29.99. Free shipping is being offered via the SmartPost method. The cards will be available for 24 hours on Topps.com. Topps will reveal the print run at the end of the sale. Here are pictures of the new cards. 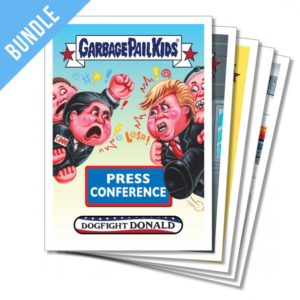 Its Tuesday, and that means Topps is right back on schedule with the presidential cards. Today Topps released Garbage Pail Kids Disg-Race to the White House cards #143-146. Today’s release focusing on Trump and his cabinet nominations, contains three GPK cards and one Wacky Packages card. Topps also today launched Garbage Pail Kids Network Spews #2. As per usual each card can be purchased for $9.99 or in lots of 5 for $29.99, 10 for $49.99, or 20 for $79.99. A five card bundle featuring each card launched today can be purchased for $34.99. Free shipping is being offered via the SmartPost option. The cards are available for sale on topps.com for 24 hours. Topps will reveal the print run at the end of the sale. Here are pictures of the new cards. 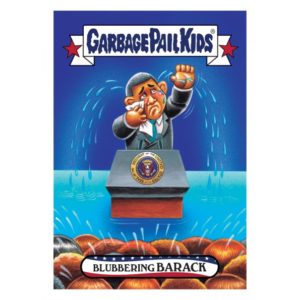 The third presidential election release this week brought a little rebound in sales for the GPK cards. Today Topps announced the print run for Garbage Pail Kids Disg-Race to the White House cards #138-#142. Once again the Wacky Packages card led the way in sales with over 400 copies sold. Unlike yesterday however, the sales for the GPK cards bounced back to closer to 300 in sales. All indications point to the Disg-Race set ending next week. Expect a full compliment of cards next week along with a big finish on inauguration day, 1/20. Here is the final print run information.