The partnership between Garbage Pail Kids and Madballs will continue in the comics. Dynamite Comics announced Madballs vs. Garbage Pail Kids Slime Again Issue #1. This will be the second limited comic series to feature the two iconic 80’s brands together. This time the story will tell the origins of the their feud through the history of time. The preview for this issue reads, “In this issue: At the dawn of time, the Earth is ruled by furry, apelike beasts – oh, wait, that’s just Kim Kong!  From their neighboring caves, the Cro-Madballs and Neanderthal Pail Kids constantly try to one-up each other! Plus: the star-crossed crush between Hornhead and Scary Carrie triggers war between the Trojan GPK and Greek Madballs!” Jason Crosby returns as the artist of the comics, along with writer Sholly Fisch. So far there are announced covers from Joe Simko, Jason Crosby, and a vintage fight poster cover. There are sure to be many move limited covers announced. The comic will be available to preorder soon wherever comics are sold. Issue #1 is set to his store shelves on Feb. 15, 2023. 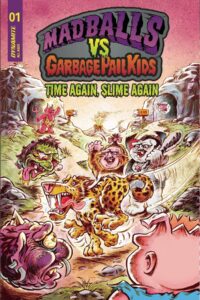