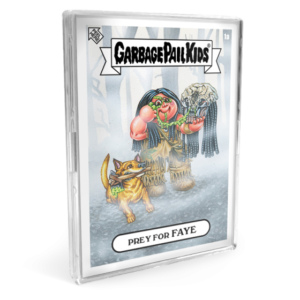 GPK collectors always like their horror themed cards. This year’s set that was offered both online and at NYCC proved to be no exception! After ending  earlier in the week, Topps revealed the print run for 2022 Garbage Pail Kids x Comic Con Oh the Horror-ible set. The set sold a total of 2,127 copies on topps.com. Those sales do not include the sales at NYCC, which sources say were right around the 700 mark. These are excellent numbers for an online set with no packs or sketch cards. The sales beat last year’s horror con set by 400, and were slightly below the Clash of Clans set released earlier this year. Despite the large number of launches in the past couple of months, collectors continue to purchase sets are new record numbers. Collectors aren’t done with horror just yet, as a new six week expansion Oh the Horror-ible set has just begun.