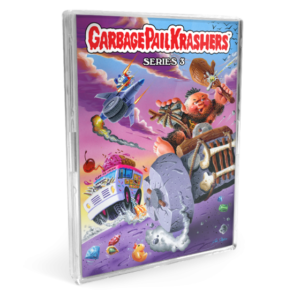 After ending a week ago Topps has finally revealed the print run for 2022 Garbage Pail Kids Krashers Series 3. The GPK car mashup sold a total of 2,447 sets. In a surprise, the set did not sell out within the 7 day sales window. It looks like Topps overestimated the demand for the set. The sales were still strong for a GPK On Demand set, but the saturation of GPK launches the past few months may be finally catching up to Topps. Collectors have continued to complain they are unable to afford the amount of new releases from the company. GPKNews was able to confirm 1,450 sketch cards completed from 27 of the 28 sketch artists on the series. That means there was right around 1500 sketches commissioned by Topps for the set. With odds of 1:2 per set, that means that sadly just under 300 sketches won’t end up in collectors hands. It also means there will not be as many Foil parallels dispersed. The releases aren’t scheduled to slow down anytime soon as more will be coming in October.