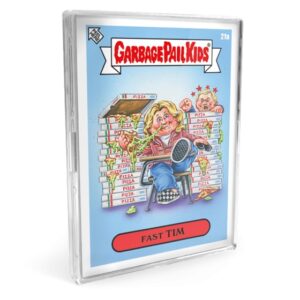 After ending last week, Topps today revealed the print run of Garbage Pail Kids We Hate the 80’s Expansion Set Week 5. The set sold a total of 1,229. Sales were down from the previous week’s set by nearly 200. The final set for Week 6 are on sale now. The weekly expansion sets will then take a break, until a new theme is launched later this year.