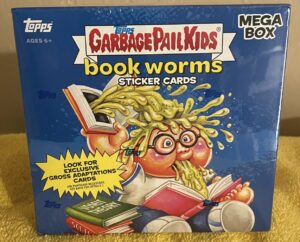 In the first post we looked at how many packs/boxes/cases were produced of 2022S1 Garbage Pail Kids Book Worms. Here’s a review of what we came up with.

So how many of each type of card was made? Topps actually helped us out with this set. By eliminating Fat Packs and cancelling Blasters, this set ends up being the cleanest one in a long time to figure out numbers for. This is a rare time where we are able to get usable data on nearly every card type. Like previous sets, Topps has continued to number many card types. This means we already know most of the parallel and insert numbers already! Makes this post a lot easier! We know Gray /199, Blue /99, Red /75, and Gold /50 for the parallels, and Patch Cards (/199, /99, /75, /50, 1/1). Like most sets there are changes with this one. Most notable artist autographs are no longer numbered. However we know artists were given 170 of each card to sign, (160 to be inserted + 10 for replacements).

First let’s figure out production for the two parallels that aren’t numbered. 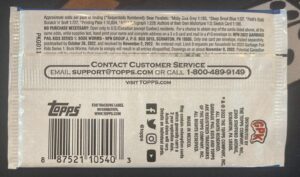 Topps actually made this pretty straight forward to figure out. There are only 8 card retail packs in Retail Display and Mega boxes. Each one has 1 green border. With production being up over 100%, we see those results in the parallels. Both Black and Green per card numbers are higher than any previous GPK set. Lots of parallel sets to go around. 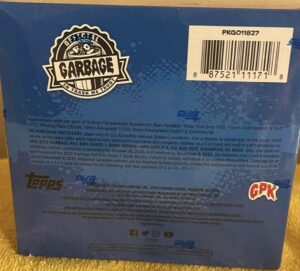 With the recent release of the Walmart Toy Aisle Mega Box, it throws a wrench into trying to figure out the numbers for all the Gross Adaptations cards. With the odds being exactly the same for cards 16-20 and 21-25, we can’t determine the print run for each. We can’t assume Topps printed 50% of both types of boxes. Without knowing the ratio of each type of Mega box, we can’t figure out the numbers. However, Gross Adaptations 1-15 being over 89k is more than base cards in Food Fight! That insert set alone is larger than any base set released in the last 12 years. Increases in the other inserts can also be easily seen. As with parallels, there are no inserts that are particularly rare.

With production being so high, collectors have noticed that the “hits” are few and far between. The odds listed for plates and artist autographs are much longer than collectors are used to. If you are hunting those, let’s take a look at the distribution of both plates and autos in each pack type.

The auto distribution flipped from Food Fight. The majority of autos are now in Collector boxes. This isn’t surprising, we know the artists signed 160 autos to be inserted into packs. We also see the increased print run for Collector boxes, with one guaranteed hit per collector box all these additional autos had to go in Collector boxes. Plate distribution is roughly the same compared to Food Fight. Another note on these numbers. If you add up all the autos and divide by 100 (auto cards in the set), it’s comes to an average of 165 per auto. Which is very close to the 160 Topps had the artists sign for the set. Total plates in all three pack types add up to 397 plates. Oh so close to the 400 plates Topps inserts into the product. This reinforces we are on the right track with our production numbers.

Now let’s take a look at how many of each sketch card is inserted into the product.

This is one of the few times we are able to run numbers on sketches. On average the total sketches inserted match up to what Topps assigned the 59 artists GPKNews identified for the set.

It’s hard to wrap my head around just how much 2022S1 Book Worms was printed. None of the parallels or inserts are rare, there is a lot of everything to go around as long as boxes of the product are busted. Are there enough new GPK collectors to support this high of print run? That remains to be seen. What will also be  interesting in the future is what will production numbers look like for upcoming sets. Will the increases continue?

Finally, can we figure out how many base cards were produced? Not really, but we can use what we know and give it our best guess! We know Collector and Retail Display packs have 6 or 7 base cards per pack. We will go with 7 for those packs. Mega boxes also have 6 or 7, but of the 17 packs in a box, 10 or 11 have 6 cards, so let’s use 6.5 for Mega box packs.

Wow! Over 24 million base cards! 121k base sets available!!! GPK isn’t a little tiny niche anymore. These numbers approach some sports card sets. While we can’t figure out ANS print runs, I’m thinking these numbers might exceed those sets. Time to reach for the heights of OS!