This is Part 1 of a 2 part series on the production of 2022 Series 1 Garbage Pail Kids Book Worms. Part 2 will be posting soon. 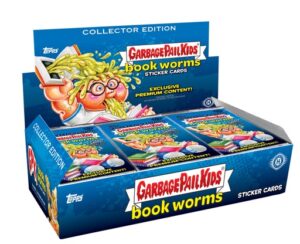 Collectors have had to wait a long 17 months for a new retail GPK set from Topps. With that long of a wait and reported sticker stock shortages, collectors wondered just how much Topps would print of 2022 Series 1 Garbage Pail Kids Book Worms. Any thoughts of a limited print run were thrown out quickly after odds started coming out. After running the numbers its clear this is the largest printed GPK set since at least 2010, and it’s not even close. So just how much of this set was produced? Read on to find out!

To begin we need to figure out how many packs were made for the entire print run. We need to use a card type that has the same odds across all various pack types, and where we know the number made. This time there are two types of cards that fit this description, Moby Dick Gray and Fool’s Gold parallels. First, a couple of notes.  As a Topps tradition, they have once again overstated the parallels by double. While Topps left off the 1 per pack parallels like Green and Black from the odds, the other parallels are falling at twice the rate they should based on actual case breaks. This isn’t surprising as just about every retail set has been this way since 2015. Come on Topps, change your methods! The one good thing with this release is because Topps eliminated Fat Packs and cancelled Blasters, with only three box types, it’s very easy to determine most numbers. We have more insight to this set than any other in recent memory.

Now that we know total pack production, let’s try to break it down by pack type. Collector and Retail Display packs are easy to figure out because they have a couple of different numbered parallels or inserts exclusive to the pack. Let’s look at red parallels and patches for Collector first.

Both of these numbers are very close, and gives us a great idea how many Collector packs were made. I’m going to use 405,000 as the pack number for Collector packs. Now let’s look at the Blue parallels for the Retail Display packs.

Here’s what I believe the total production numbers to be for Book Worms:

Production is up significantly over Food Fight. This is the fourth straight GPK release to set record release numbers. We aren’t in OS territory yet, but it’s been years since GPK has seen production like this. Take a look at how production compares to recent sets.

After figuring out numbers on sets for 7 years now, i have never seen an over 100% increase, or double in production. I continue to be amazed by the production numbers over the last 3 years. The popularity of trading cards, including GPK, has exploded and it remains to be seen how long the increases will continue. The odds are so long on hits now, it’s takes 2 Collector cases to just hit 1 sketch card. Printing plates, that were fairly abundant in Collector cases, are now 1:7 cases. Topps has now had to increase auto print run to 160, and add patch card parallels just to get enough hits for Collector boxes. Perhaps most interesting is how this will play out the remainder of 2022 and into 2023. Does the Chrome OS 4 print run surpass Boom Worms? Will Topps find enough sticker stock to print 2021S2 Vacation, and how much gets printed? The coming months will be fascinating to see how Topps navigates the GPK landscape.

This is Part 1 of a 2 part series on the production of 2022 Series 1 Garbage Pail Kids Book Worms. In Part 2 we will look at production numbers for all parallel and insert sets. Part 2 will be posted soon.