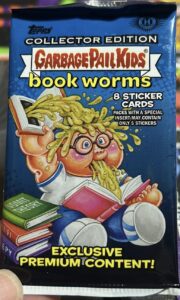 We are still a couple of days from the official release of 2022 Series 1 Garbage Pail Kids Book Worms, but boxes are starting to show up in collector’s hands. Thanks to collector Kayla Caratachea for sending along the odds for the Collector pack. Despite reports of smaller production for this set, the odds say otherwise. Black borders do appear 1 per pack as advertised, and do not show on the odds. Odds for reds, golds, patch cards and shaped sketches are significantly higher than Food Fight. It’s too hard to tell yet if parallel odds are overstated by double as not enough boxes have been busted to tell trends. The advertised Iron On patches do come as one per Box Toppers, despite Topps leaving those off the checklist. Once Mega boxes odds are located I’ll have articles going over production numbers in the days ahead. 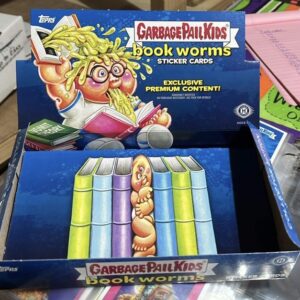