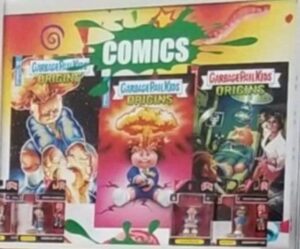 Topps is once again attending this week’s Global Licensing Expo in Las Vegas. Their focus is completely on Garbage Pail Kids, trying to lure new companies to produce licensed GPK products. On this year’s booth are cover images for a new upcoming GPK comic. Garbage Pail Kids Origins is the brainchild of artist Jeff Zapata. Jeff was the art director over GPK during the ANS days. For years Jeff has shared artwork and story ideas online for origin stories from many popular Garbage Pail Kids. His dream is finally becoming reality in this new comic series from Dynamite comics. Jeff teased on his Facebook account that the comic would be released this November. No other information is available yet on the comic.