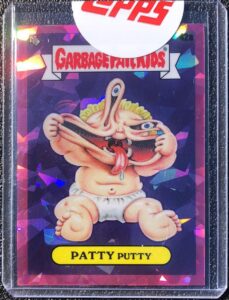 Some GPK collectors received a surprise in their mailbox today in the form of their GPK Sapphire replacements. Topps has begun issuing replacements for collectors whose Garbage Pail Kids Sapphire boxes did not contain the stated “2 parallels inside”. Thanks to collector Chris Yuergens for sending along pictures of his cards. Chris received what appears to be five “pink” Sapphire parallel cards. The color resembles the 1/1 Padparadscha, but with one important difference, they are not numbered on the back and instead are stamped with “Refractor”. Other collectors have also posted their replacements. 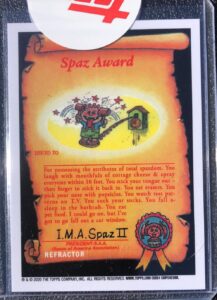 GPK Sapphire was a huge hit with GPK collectors, and non collectors, as the excitement brought in collectors from other card types to the hobby. However, collectors soon begun to realize the product was riddled with errors. Many boxes contained 0 or 1 “hits”, despite the statement on the box saying there were 2 parallels inside. After the release of the product, a handful of collectors received either random parallels or GPK Sapphire packs for their replacement requests. That was a very small number of collectors, and most collectors have been waiting months for Topps to respond to their requests. Tracking done by Benjamin Siegler and others within the various GPK break groups, have shown that nearly 20% of boxes opened do not contain 2 parallels. With a print run of upwards of 16,000 boxes, this left Topps with many requests for missing hits, and not having replacements. In addition to the missing hits other errors in the product has surfaced. Tracking has shown there are 22 characters that have not had a Teal (/99) parallel surface, 34 base cards are double printed, and multiple Nasty Nick 1/# parallels have surfaced.

Topps has not commented on any of the GPK Sapphire issues to date. GPKNews has made multiple requests to the company for comment, including today for the replacement parallels. If Topps responds, this article will be updated.