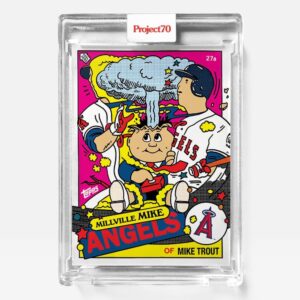 Last week, as part of their year long Project 70 set, Topps released a card that featured an iconic baseball player and an iconic Garbage Pail Kids character. Today they revealed the print run for Project 70 card 357 Mike Trout by Ermsy. The card sold a total of 10,687 copies. This marks the 6th highest selling Project 70 card to date. The combination of Mike Trout and Adam Bomb brought out collectors from both sides to push sales towards the top. There’s still a long way to go in the baseball season, could GPK’s make another appearance in the set?