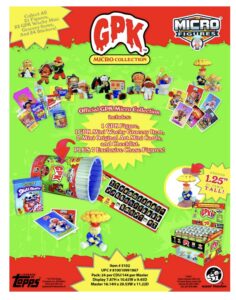 According to a listing on Toywiz, Super Impulse is launching Garbage Pail Kids Micro Collection Mystery Packs. GPKWorld was first to report on the listing this morning. Each mystery pack is shaped like a garbage can and will contain 1 GPK figure, 1 GPK Wacky Grocery Item, 2 mini original art cards, and a checklist. There are 31 total GPK figures to collect. Based on the picture on the listing, there appears to be 12 different characters each with two common variations. For 7 of the figures there will also be a chase version. There are also 23 different GPK Mini Wacky Grocery items based off of artwork used as part of GPK sets over the years. There will also be 24 different sticker cards. Like the previous released Micro figures, they measure approximately 1.25” tall. Toywiz has individual packs available for $5.99, and 24 pack cases for $129.99. Toywiz says the figures will be available in September.