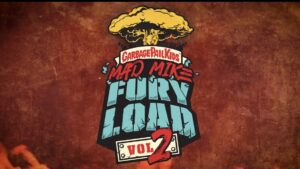 Topps today begin teasing the next part in their Garbage Pail Kids stop motion animation short, Mad Mike Fury Load Volume 2. The teaser first appeared on the official Topps GPK Facebook page. The movie is a collaboration between Adam F. Goldberg and Jam Roll Studios. The first part was released in Dec. of last year. The video is expected to be three parts in total. Topps is planning to release the latest episode early next week.