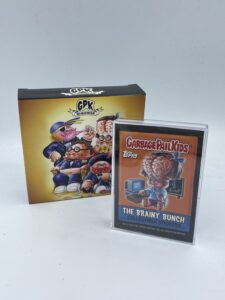 It’s been three months since the first Garbage Pail Kids Collector’s Club set shipped, so it’s time for set two. Members of the Club started receiving shipping notices last week, and sets begin showing up in mail boxes today. Thanks to Chotckie Chuck from GPKNation for sending along pictures. The second set is titled The Brainy Bunch. Each card features Brainy Janie somewhere on the card interacting with her classmates. The set features 20 cards, 10 new pieces with a/b versions. Artwork was completed by artists Joe Simko, David Gross, Brent Engstrom, Joe McWilliams, and Neil Camera. The quarterly gift included with the set are two GPK flower pots with seeds. Yes you read that right, club members get to grow their own flowers. The pot features the GPK Collector Club logo on them. See below for pictures of the cards and gifts. Members should expect the next release around September. 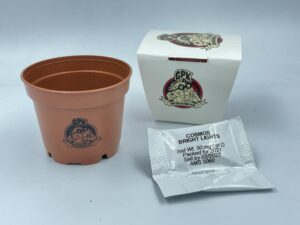