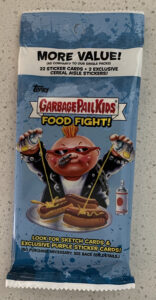 In the first post we looked at how many packs/boxes/cases were produced of 2021S1 Garbage Pail Kids Food Fight. Here’s a review of what we came up with. 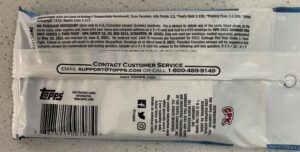 So how many of each type of card was made? We can’t figure it out for every type of insert or parallel. Some card types we don’t have enough information. Other times however, Topps is nice enough to tell us exactly how many of a card was produced. Like previous sets, Topps has continued to number many card types. This means we already know most of the parallel and insert numbers already! Makes this post a lot easier! We know Blue /99, Red /75, and Gold /50 for the parallels, and Relics /199 and Autos /80. There were a few changes in this set, compared to the 35th set. Auto print runs are significantly higher, Golds moved back to /50, while Patches are slightly less.

First let’s figure out production for a couple parallels. 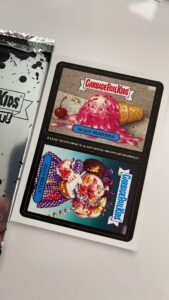 A lot to discuss with the the parallels. First off, because we are unable to break out Blaster and Fat Pack production numbers, we are unable to figure out Yellow and Purple print runs for this set. It’s safe to assume the print runs are approximately the same percent higher than their 35th counterparts as the packs are. Likewise, the Green numbers above aren’t as accurate as I would like, because we don’t have Fat Pack production. Again, Fat Packs are being counted as 3 packs, but each fat pack comes with only 2 green parallels. The actual number is slightly less, but you get the idea, there are a ton of each green border out there. Black parallels are also much higher due to the increased Collector print run.

The first insert we should talk about are the GPK Wacky Packages. According to the odds above, there should be well over 900 of each card. However, based on the breaks that have been observed, the GPK Wacky’s are only falling in approx 15% of Collector boxes. If this holds true,  and the remaining Wackys never surface, it’s reasonable to think there are only 140-150 of each GPK Wacky actually out there. Also, like with the parallels above, because we are unable to break out the production numbers for Blasters and Fat Packs, we are unable to determine how many Cereal Aisle and Celebrity Chef inserts were made.

The numbers we are able to figure out all tell the same story, parallels and inserts are up considerably because production is up. Another interesting thing to look at is the distribution of the “hits” in the various pack types. Just by looking at the retail odds, it’s clear the odds for “hits” are higher than they have ever been, much higher than any other set. Why is this? Topps increased production on Collector boxes, and each box is guaranteed a hit. With Parches actually being less this set, and only a few more sketches, Topps has to move a large percent of autos and plates to Collector boxes. Not only were they moved, but auto print run had to be raised to /80 to accommodate the hits. Collectors will notice the majority of hits from a Collector case will be autos. Just how many plates and autos are in Collector vs. Retail packs?

There are about 35% of the autos and a whopping 70% of printing plates in Collector Packs. That’s a lot when you consider Collector packs only make up 12% of the total production run. So if you are wondering why the odds are so long in retail packs, you can blame Collector Boxes for the results.

The bottom line is once again, Garbage Pail Kids are seeing huge production increases into 2021. GPKs are not immune to the huge increases in demand for card collectibles since the Covid-19 pandemic started. Not only has there been an increase of new collectors, but the large influx of sport card sellers looking to capitalize on the current GPK demand is causing numbers to sights unseen in decades. The question now is how high can the demand go? Will we see continued increases with sets later in 2021?

Over 12 million base cards printed!! We’ve hit 8 digits! Once again, by far the highest produced set since Topps has been supplying odds for packs. While I have no way of knowing for sure, I suspect these numbers are only surpassed by OS print numbers. How high can they go?