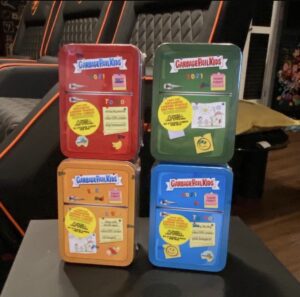 2021 Series 1 Garbage Pail Kids Food Fight doesn’t officially release until 2/24, but that hasn’t stopped some stores from putting them out early. Thanks to collector gpkkilla for sending along the odds for the refrigerator tins he found at Walmart. Thanks for collector Jake Schaaf for sending the odd along for the Retail Display packs. Once again, in keeping with Topps “math”, the odds are overstated by double on the packs. Just like the 35th series, inexplicably, the odds for the green parallels are listed as 1:2 in packs, when each pack comes with 1 green. Yellows are also overstated by double as this collector pulled 2 in his tins. I imagine the odds will be double on all parallels, but we will need more breaks to confirm. Production appears to be very high, and near or even exceeding the 35th anniversary. Odds for plates and panoramic sketches are very long. Gold odds are actually harder than the 35th. One big disappointment is the odds for Loaded Sketches do not appear on the box like they usually do. GPKNews will reach out to Topps for confirmation the Loaded Sketches were inserted. Finally, the 1 per box redemption for a pack of digital GPKs on the WAX Blockchain features the artwork of Nik Castaneda, who did the art for the digital cards. As of press time the website to redeem the digital cards has not been activated by Topps. Odds for Fat Packs  will be added to this article once we get them. 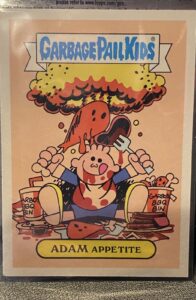 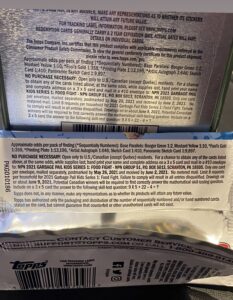