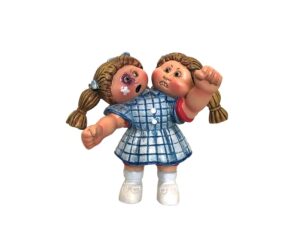 Topps got another early start this morning while launching Garbage Pail Kids Trashy Treasures Series 2. Just like the first series, there are five figures available. Double Heather sold out almost immediately after being listed for sale. Spilt Kit also sold out in under an Aa a hour. As of press time Nat Nerd, Peeled Paul, and Brainy Janey are all still available. Also like the first series, collectors have the chance of receiving a parallel figure. However, this time Topps did not reveal how many of each parallel is available, nor did they reveal the total print run of each character. The parallels available are; Red (Most Common), Green (Common), Black (Rare), Silver (Very Rare), and Gold (1of1). Each figure is available for $19.99. No free shipping is available, customers are charged based on geographic area. There is no time clock on the sale of the figures, they look to be available until they sell out. Here are pictures of the various figures with some parallels.