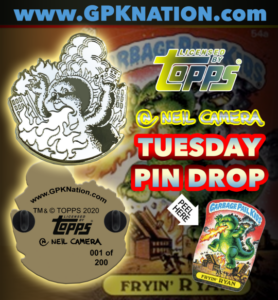 GPKNation is set to continue their artist series this week. GPK artist Neil Camera will have his artwork released on a second pin/coin combo, as Fryin Ryan takes his turn in the spotlight. This Tuesday, 11/24 at 1:00 EST, the Fryin Ryan pin will launch. Like previous pins, the Ryan will be limited to 200 copies. Then on Friday 11/27 at 1:00 EST there will be two coins using the same artwork. There will be a Fryin Ryan and Charred Chad coin launching separately. Each coin will also be limited to 200 copies.

That’s not all, the colored wallet series that was first launched last week will continue. Next up during Tuesday’s launch will be the blue Adam Bomb emblem wallet will be limited to 20 copies like the previous wallets. There are sure to be other surprises this week in store for collectors as the holiday season kicks into full gear! 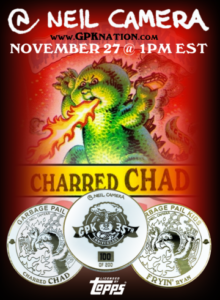