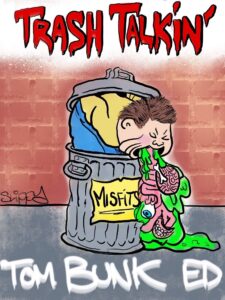 This is the interview that EVERYONE wanted to happen but no one believed was possible. An interview so momentous that you’ll need to pinch yourself in the eye ball to know for sure you’re not dreaming…and then even THEN, you might not believe it. Well BELIEVE IT BUSTER! In years to come they’ll ask, “Where were you when Tomas Bunk joined the Misfits for a chin wag?” And you can say, “Right here, in my happy place, with my Misfits.”

Roddy Francisco Fell – Tom, firstly, thank you so much for agreeing to be a part of our artist interview series. We call you the Godfather of the Misfits, so it feels so right to be able to discuss your career.

RFF – Your art often captures the atmosphere of the 1970s New York slums. Can you explain why this is so prevalent in your art?

Tom Bunk – I came to NY in 1983, and was very impressed by the leftover 70ies, especially Harlem. A very desolate city display, pleasantly anarchic…

RFF – Can you tell us about some of your most memorable fan experience? Maybe a fan letter, photo, or in-person moment.

TB – I am getting many letters over the years, from fans who grew up with collecting the GPK, and it was a very crucial time in their lives, and they write to me stories of how much it meant to them buying and collecting and trading the cards. Some write that my work has started their artistic career. I also get to hear great stories when I meet the fans at conventions, not only here in the USA but also in Europe, Italy and Holland. It makes me feel good to know how much my work meant to them growing up.

RFF – What is your favourite art utensil? Is there a certain brand piece you swear by?

TB – I don’t work on the computer, so I have tons of brushes, water- and acrylic colors, pens, scissors, knives, coffee, etc… I love the chaos around me when I work.

RFF – Which piece of art equipment has served you the longest?

RFF – GPK aside, your work as a ‘Mad’ magazine cartoonist is legendary, you’ve created some of the best large scale “busy” pieces that the magazine has ever seen, whats your favourite and why?

RFF – On the “busy” theme, I have a friend that says it was really YOU that invented Where’s Waldo? and should be due all of the royalties – what do you say to that?

TB – The crowded scenes go back for centuries. One can find crowded pictures from the 14th &15th century. There is also Bosh and Breughel, Hogarth and his conteporaries etc….its an old tradition to fill up a pages with silly mortal fools. I am just continuing the Wimmel tradition…

RFF – Do you maintain contact with Mr John Pound and do you have any interesting/funny stories about your time when you two were the main artists for GPK during OS3?

TB – John Pound lived in California and I lived in New York, (actually I had a studio in Brooklyn, not far from Topps) and we didnt meet until 15 years later at the Comicon in San Diego, together with Jay Lynch. 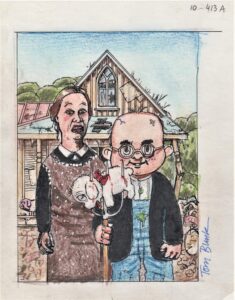 RFF – You were involved with the artwork on the backs of OS1 and 2 but not the fronts, is there a story behind this?

TB – At the time when I was working on the backs I was also working on a whole other series- The Gross Bears & Big Bad Buttons. When the GPKs started to take off, John could not work fast enough, so they hired me. I think John didn’t like it because I would paint more stuff around the GPKs characters, and also tried to create some atmosphere. He felt he had to keep up and work more on details. Next to the GPKs I was working on many other series like Wacky Packs, etc… Topps kept me busy around the clock. I was something like a House artist until 1990 when I switched to MAD. This was creativitywise more interesting for me.

RFF – Outside of art… What’s your guilty pleasures? What is some of favorite music and favorite films?

TB – No guilt here, I went through many stages of favorite music, from French chansons to Frank Zappa in the 60ies, post punk stuff, new wave British bands (Joy Division, New Order, etc). Then in NY, I was listening a lot to WFMU, a great university station (they still exist), a wide ranging mix of crazy stuff, European progressive rock, gong, and soft machine. For a while electronic stuff (Thievery Corporation, Air, etc) then back to French Ye-Ye retro music, and now mostly easy Jazz…and everything else…

RFF – Seeing first hand GPK start from its humbled beginnings and knowing where it is at today, did you ever imagine that it would have the cult status it has?

TB – When I did the GPK I was not aware that it was such a worldwide phenomenon. I was so busy working, day in day out, only when I started to see everywhere the thrown away wrappers and the stickers on walls, I kind of figured it out. I am still surprised of the worldwide influence they had on innocent kids. They were for little kids who grew up in the 80ies what MAD was for the previous generation. They were a Wake-Up Call….it was like saying: dont believe what society is telling you!! Grown ups are lying.

RFF – What was the first GPK final you handed over to Topps and what was their reaction?

TB – My first job was a design for a Funny Farm Box, Bubble Gum Eggs, a big chicken blowing a bubble and sitting on colorful eggs…they must have liked it because they used it.

RFF – You and AJ Boot of the legendary GPK reference site gpkworld.com are very close buddies… can you tell us a little on how this friendship came about?

TB – Aaron wrote to me many years ago for some information and we became good friends. I had at that time somebody else selling my GPK sketches, but that didn’t work out and Aaron was nice enough to offer me a place on his great website. And thats wonderful, because I have so much sketches and finals to show and sell.

RFF – With all the bootleg sets and fan sets doing the rounds, have you ever thought that you should get the “old band” back together for one final gig? To sit down with Pound, Newgarden and just create something new, fun, edgy and dangerous again? Go on!!!! I dare you!

TB – You cant repeat something like the GPK craziness, and in the meantime we all moved forward, doing other things.

RFF – Only one last thing to say here and that’s cheerio from bunk and cheerio from me! But before you go – Cheerio is such an old fashioned British saying and is now almost your catchphrase! Is there a story there? Where did it come from and when did you start using it?

TB – I stayed once in a hostel in Portland Oregon and in the Bathroom was a sign,
“Please keep the toilet clean, Cheerio!” I just loved the uplifting sound of it. CHEERIO! I still dont know what it means. 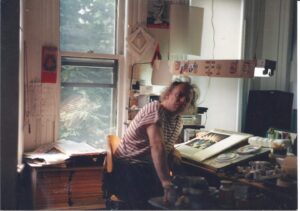