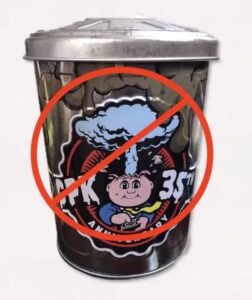 2020 continues to rear its ugly head. Wednesday collectors got some upsetting news that Topps has cut production on 2020S2 Garbage Pail Kids 35th Anniversary boxes. Mikee Friesen, who sells a large quantity of GPK boxes every release, posted a message he received from his distributor that said they were informed that Topps “significantly” cut production of Collector boxes due to a “production issue”. Today the distributor sent an update that production on Collector boxes was cut 60% by Topps. GPKNews has reached out to Topps for a statement, but has not heard back. If Topps responds, this article will be updated. It would appear the production issues are only related to Collector boxes, as retail distributors haven’t received notices.

Collector boxes are set to arrive in a collectible garbage can tin. They also exclusively contain black and red parallels, GPK Wacky insert set, relics, shaped and triptych sketches. It’s unknown if all all the inserts and parallels were inserted into the limited production run, or if a number of the cards didn’t make it. Productions issues or not, 2020 Series 2 Garbage Pail Kids 35th Anniversary is set to release next Wed, 10/28/20.