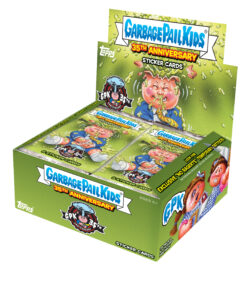 It’s been a long year celebrating the 35th anniversary of GPKs, and now the retail set doing just that is finally starting to appear. Thanks to collector Trenton McAnally for sending over pictures of the Retail Display pack odds, and Sam Park for the pictures of the Blaster odds. Once again, in a Topps tradition, the odds appear to be overstated by double for the parallels. Greens are in explicitly listed as 1:2 packs on Retail Display packs, when each retail pack comes with one green parallel. Also the Blues are listed at 1 per box, but on the break I saw, two blues were pulled. Yellows are also listed as 1:10, but really come 1 per blaster. It happens every series, and this one is no exception. Production is through the roof on the Retail Display boxes. Based on the odds for the Blues, production is up 1000% on these. However the other odds, while much higher, are not 10x as high, so something isn’t adding up. Odds for Blasters are also significantly higher than the Late to School series. There is at least one unannounced thing listed on the pack odds, with redemption cards for OS 1 or OS 2 packs. The odds are long on those, in addition to the Be a GPK Redemptions. There also appears to be a RL Stine promo card inserted into packs, to help advertise the recently released book. (This article will be updated with Blaster and Fat Pack Odds when we get them.) 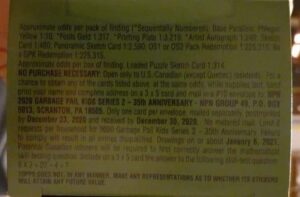 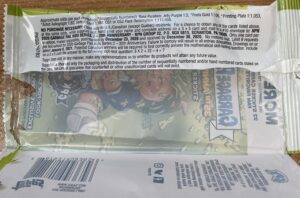 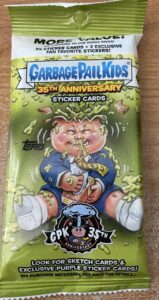