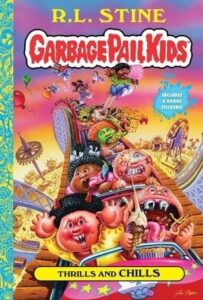 While it was announced a few weeks back, Abrams has revealed the cover for Garbage Pail Kids Book 2, Thrills & Chills. This will be the second book in a planned three book series from author R.L. Stine. The cover was first revealed by SYFY in an interview with Stine on their website. The cover advertises there will be four new stickers that come with the book. Once again cover artwork was done by GPK artist Joe Simko. The book is currently up for preorder on Amazon and is scheduled to release on March, 23, 2021.