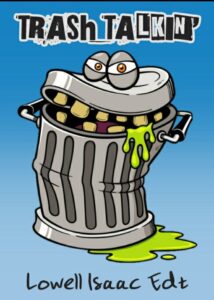 In the second installment of Trash Talkin’, we caught up with illustrator extraordinaire Lowell Isaac and asked him 13 lucky questions and some bonus ones, so we all get to know him better.

Sybil Ferro – First question, nice and easy… what kind of deal did you strike with the devil to draw like you do? You don’t have to answer that…but seriously…what demon possessed you?

Lowell Isaac – The deal is that you have to be willing to be bad at everything else in life to be decent at drawing cartoons. I think it is the same amount of work that it takes to become a doctor or lawyer, but none of the benefits. Just the satisfaction of depicting a convincing pile of vomit.

SF – Did you collect Garbage Pail Kids when you were younger and what is your earliest memory of GPK? 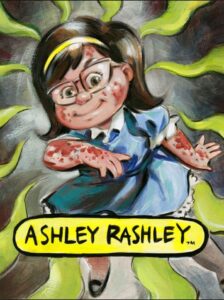 LI – I think I had a few, to me they blend together with all the great gross irreverent creepy content we had at our disposal in the 80s. GPK, Mad Magazine, Madballs, and all manner of grotesque toys and comics. That was so natural to us, it’s in our DNA. Maybe as a reaction against corporate sell-out culture in the 80s there was this strong undercurrent of subversive, anti-social material that struck a nerve with young odd-balls like me. I don’t even question why I gravitate to that kind of imagery still– but I do feel like it’s missing from the scene a bit today. Instead of figuring out how to sell weird new ideas, everyone just wants to sell-out. Or maybe I’m just old and grumpy. But the truth is, my wife is the hardcore GPK nut, and she got me back into it. Without her it would never have crossed my mind to pursue this.

SF – I have to ask you about your influences. Who inspired you to get into illustration and who else working right now, rocks your socks, bakes your cake and ruffles your truffles?

LI – I was really lucky to grow up in an art family, going back to my grandfather– so there was a constant flow of art-books and museum trips– which means too many influences to name. Some that stand out would be R. Crumb, Ralph Steadman, Jack Davis, Kathe Kollwitz, but the list would go on and on. I always tend to look back at artists from the past more than now (although many of my old heroes are still around and kicking). There are some current European comics artists I love, like Jorge Gonzalez and Lorenzo Mattotti– reaching back again Alberto Breccia and Jordi Bernet knock my socks off. I think they do more interesting things with comics in Europe– even though the US invented the medium we haven’t moved too far past men in tights.

SF – GPK is riding a crest of a wave at the moment, any ideas why and what do you think is still missing?

LI – Selfishly, I would love to see Topps embrace more diverse styles and approaches, because then they might let me do some of the official cards. I’m not too good at changing my approach, it’s hard-wired at this point– but it seems to me that many fans get excited about that. We’ve got some sketch artists doing really innovative and interesting work– and I personally think they should all be doing official cards, and guiding the property in new directions. I think that would please the core fans, but also possibly attract some new ones. Plus that’s the kind of art I like; I want to see the hand of the individual artist in the work. Yes, Topps is a big company, and big companies are risk-averse, but isn’t it sort of at the heart of GPK to go against the establishment?

SF – Do you have a favourite GPK character to draw?

LI – To be completely honest, I can’t get tired of drawing Adam Bomb. He’s asked for a lot– but he’s so simple and perfect that you can do a lot with him. I could draw Adam Bombs all day.

SF – Where else outside of GPK can we find your art? What are you working on at the moment that has you excited?

LI – I always have a few projects going at a time. I’ve got some picture books and comics out there, but lately I’ve been doing more with animation. I got to work on an opening title sequence for an upcoming Troma film (“Kill, Dolly, Kill!”) about a transvestite serial killer– and now I’m working on a wacky animation project on my own that I’ll probably start showing people bits of soon.

SF – What would be your dream illustration job?

LI – Well, the good (and maybe bad) thing about being an artist is that you don’t have to wait for a dream job– if you want to make something you can just make it. You don’t need much money to do it, you don’t have to wait for someone to give you permission– which is great, but it also means that all the steam has to come from you. I have sketchbooks full of ideas that I want to make into books and short animated films and everything else– it’s just a matter of doing it! Once you do the work opportunities tend to materialize– that’s what happened with GPK. I just started drawing goofy stuff for my wife, a sketch artist saw it and connected me to Topps. Now I’m a part of this really cool community.

SF – Would you recommend drawing sketch cards to any of your students? Do you think it’s opened any doors for you?

LI – I think I would– but it would need to be one who could draw really quickly. I wouldn’t recommend anyone do sketch cards who would spend time laboring over them, because the money from Topps is an insult (I don’t even bother to send in my invoices half the time, to be honest!). However, for me, “GPK” means the fans more than Topps. The fans are so enthusiastic, supportive, appreciative, and they make it worthwhile both creatively and financially. The thrill of saying you’re employed by Topps wears off fast– and I will admit I don’t treat them with much reverence anymore. But I will always be loyal to the fans, they’re such great people to work with– I would call a few of them real friends. And yes– I’ve made some interesting connections with GPK fans that led to other work, for sure.

SF – With the world in the state it is, do you think we need GPK right now more than ever (to parody politicians and champion counter culture)?

LI – We do– and again I think we’re missing a vibrant anti-commercial counter-culture right now. I don’t know how much good it does though, to be honest; we’ve got big problems, and too many people who want to ignore them (and are ready to fight to the death to preserve their ignorance). I’m a lot more cynical about the power of parody than I used to be. But, it makes me feel better to draw the things that piss me off or freak me out– it’s cathartic to make, and I think cathartic to look at, if nothing else.

SF – If Topps asked you to work on a political set, would you/could you do it?

LI – In a heartbeat– as long as I had some say about what I was drawing.

SF – What’s the last thing you drew? And can you show us?

LI – Sure– it was a weird little animation experiment I did last night– I’ll attach it as a gif.

LI – It was fun to do my take on TMNT– and when they let me do Star Wars, which I’m a life-long fan of, I was compelled to make fun of Jar Jar on every card. They wouldn’t accept a single one– but I made myself laugh, which is ultimately the goal. I just couldn’t play it straight– Star Wars has been eaten up by this massive corporation and my heart isn’t in it anymore. The truth is, I’m pretty tired of franchises altogether. You know what was great about all these franchises from the 1970s and 80s that we all love so much? They were new ideas! People were throwing out whatever odd-ball gross-out thing they could come up with– and we loved it! Star Wars, Ninja Turtles, Ghostbusters, Gremlins, Robocop, Toxic Avenger, Pee-Wee, Beetlejuice, etc. etc. — there was no formula, it was just crazy shit– and we ate it up. If we really want to keep that spirit alive, we need to come up with crazy NEW ideas! Or at least visit these old properties in completely new ways. 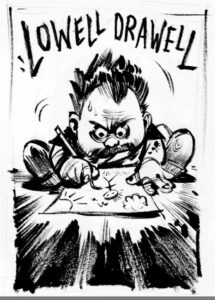 LI – I drew myself as a GPK character– I’ll send that along. I’ve done quite a few actually– the first GPK I ever did was my wife. That’s what I originally thought people would want– new characters based on themselves, that would be a lot of fun on my end. A couple of folks have asked for that. If I had to say, I guess Nasty Nick– what’s better than a Dracula? They did one Lowell card– a hockey player named Lowell Goal. Yuck!

LI – I’m going to choose an illustrator who I was a fan of, who became a teacher, and eventually a friend. C. F. Payne could easily have done GPK, he did a lot for Mad Magazine and other editorials, and I’ve learned a lot from him in every way. That includes some of his techniques but also his approach to art and to the creative life– he’s a great artist and educator.

SF – We started on Demons so let’s end there too…(bonus question!) who would win in a fight between Hot Scott and Cranky Frankie? 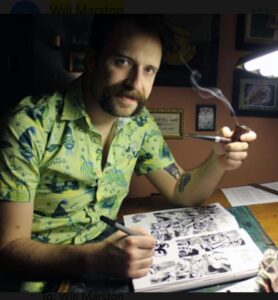