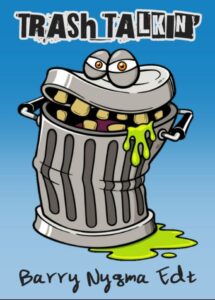 In the first instalment of our soon to be regular feature – “Trash Talkin”, we caught up with Misfit favourite, Barry Nygma and asked him 13 lucky questions, so we all get to know him a little better!

Sybil Ferro – Did you collect Garbage Pail Kids when you were younger and what is your earliest memory of GPK?

Barry Nygma – I absolutely was obsessed with them… My Mom would take me shopping about once a week or so and I would always talk her into letting me buy a pack or two of trading cards. I started out with Baseball cards (in ’85, the Royals, my hometown team, won the World Series), but in addition, I also loved comics and cartoon images so Baseball Grossouts and Garbage Pail kids were right up my alley. After a while, it was mostly GPK and I would sit on the floor of the grocery store (GPK and non-sports cards wer bottom-shelf items) and try to use the Force (yes, I was also a Star Wars nerd) to figure out which pack or two to buy…

BN – It changes from day to day… I always try to slide a few of my favorites into every set; Janet Planet, Heavin Steven, etc… But really I’m trying to draw more characters that I HAVEN’T drawn repeatedly. Or that get ignored in sketches. Working with quite a few more ANS Kids this round.

SF – Are there any scenes or characters from GPK that you won’t draw?

BN – I don’t care much for a lot of the more sexualized characters. And characters that are playing with poo. Adult GPK aren’t much fun. And after having recieved my only rejected card on a Trump piece, I’m avoiding a lot of political stuff, as well.

SF – Other than in its hay day, GPK has always been quite niche and on the fringes – what do you think that says about us Collectors?

BN – I think that most collectors are fringe people who’s tastes aren’t dictated by any particular cultural trends. It’s a weird hobby for adults to have and most of us still clutch onto that childish side for nostalgia… It takes us back to a wistful time when we we’re young, innocent, the whole future was ahead of us still and we didn’t have herpes yet.

BN – I’d like to do a base card or two someday… But I’m pretty solid with where I am now with it. There’s politics involved with getting to the top in any field and I don’t know that I’m willing to contend with that side of the Art world.

SF – GPK is definitely riding the crest of a wave right now. Why do you think that is and how long do you think it will last?

BN – I think most people who remember them fondly from their childhood are now working and have the money to buy things from their childhood that make them happy… Or they didn’t have them as a kid and never stopped thinking about them.
I think it will last as long as there are crazy collectors willing to splash out the kind of money that things like tiny statues and superfractors demand… Having said that, I still have a hard time wrapping my head around what people are willing to pay for manufactured rarity.

SF – What’s the weirdest reaction you’ve had when you’ve told someone that you draw GPK for a job?

BN – Blank looks, mostly. Then I have to explain what a sketchcard is… Or what a Garbage Children is. Then it’s mostly polite smiles and nods.

SF – Have you missed the convention scene whilst we’ve been in lockdown?

BN – Yes and no… I was looking forward to GrossCon, but couldn’t risk it with my wife being high-risk. I love talking to other fans about what we do and the history of our hobby. Local Cons, not as much. There have been a few that were great and a few that were pretty meh. But for all the preparation and having prints/stickers/pre-sketched cards/comic covers/etc. is pretty time-consuming and takes away from time spent creating.

BN – Honestly, I’ve done the Big 3 that I really wanted to do. GPK is always nearest and dearest, but Mars Attacks and Wacky Packages were also on my list. And I did them both, and even got to draw some Ninja Turtles, as well!

BN – Probably that Smokin’ Joe character from Late to School that’s covered in a rainbow of paint… I’m always finding ink smudges or acrylic paint smears on my arms and clothes.

SF – What is GPK missing?

BN – I still miss the old fashioned Bazooka Joe style comics on the back, along with the mail-away items. I also miss file folder backs… They both held my attention even more than the front of the cards. Clever writing, great gags, a new bit of art for beloved characters… It was all there.

Though, not to be sneezed at is the work of many of our fine GPK Artists outside of GPK. John Pound and Jay Lynch’s work on various underground comix blew my mind when I first stumbled across them in my Uncle’s basement, and Tom Bunk’s MAD work is outstanding, as is Denis St. John’s and Lowell Isaac’s comics.

SF – Who would win in a fight between Ray Decay and Toothie Ruthie? 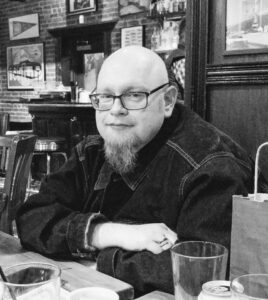