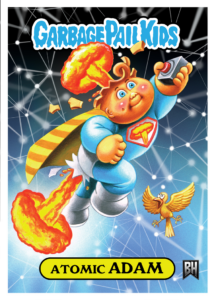 Did you try out any of the digital WAX x Topps Garbage Pail Cards? If so you may have a couple of gifts waiting for you in your account. Topps partnered with Blockchain Heroes to pass out exclusive versions of a new card, Atomic Adam. The card was created to help promote a new upcoming digital NFT launch called Blockchain Heroes. All WAX wallets that contain a GPK or BCH card were gifted two cards Wednesday night. Everyone received the “common” version of the card. Everyone also received one parallel version. The different versions available, and chances accounts had to receive them are; Uncommon (59.35%), Rare (25%), Epic (12%), Legendary (3%), Mythic (.5%), and Golden Fury (.15%).  Blockchain Heroes is a set based on popular blockchain figures, turned into superheroes. This version of Adam Bomb was drawn to match the superhero theme of the set. The back of the card features Atomic Adam’s back story. This marks the first time new Garbage Pail Kids artwork has debuted on the WAX Blockchain. Collectors wishing to check out what card they received must log into their Wax Cloud Wallet at the Atomic Assets website. BCH is based on the new Atomic Assets standard, therefore the Atomic Adam is only visible on sites that support Atomic Assets. Collectors can view their Atomic Adam and buy/sell versions of the card there. Be sure to check your account, you may have a valuable card waiting for you!