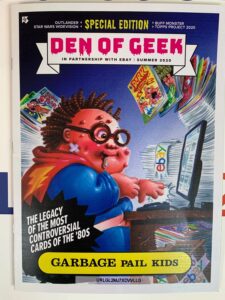 According to a magazine article in Den of Geek there will be an exclusive Garbage Pail Kids x eBay online set coming in August. Thanks to GPK collector Avo Jeknavorian for the pictures from the magazine he received in the mail. The magazine appears to be a special edition between Den of Geek and eBay. According the the magazine, the set celebrates buying and selling on eBay. All the artwork in the set was created by artist Joe Simko. The 10 card set will sell for $19.99 on eBay. The set will be for sale for one week starting the week of Aug. 10.