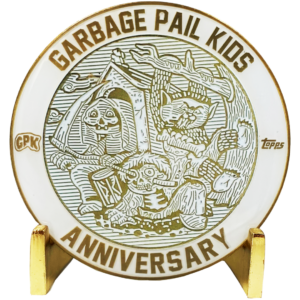 Adam Goldberg, in partnership with coin designer Louis Gregory, have launched a 35th anniversary Garbage Pail Kids Challenge Coin. The officially licensed coin features Beth Death, Eerie Eric, and Dead Ted on the front with the 35th GPK anniversary logo on the back. According to the description on the site the coin, “features striking artwork with metal plating and white cloisonné. It’s a 2 inch coin with artwork embedded beneath a lustrous coat of clear epoxy.” The coin is limited to only 100 copies. The coin can be purchased from the GPKNation.com website. Each coin is $34.99, plus shipping. (Update: The coin sold out in just 4 minutes.) As a bonus each order comes with an autographed Adam Goldberg card. Adam is perhaps the hobby’s biggest celebrity collector. He is the executive producer and creator of the popular sitcom The Goldbergs. This is the first coin in a planned three coin series. The other two coins in the series will be launched soon.