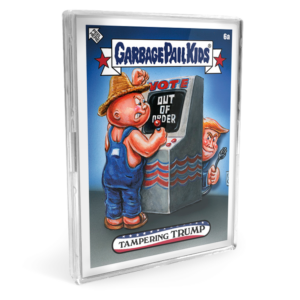 Topps has hit the mother lode. The first political GPK online set in years has proven to be hugely successful. Yesterday, Topps revealed the print run for 2020 Garbage Pail Kids Disg-Race to the White House Set 1 Iowa Caucus. An absolutely astonishing 1,870 sets were sold during the week the set was available for sale. This not only breaks the online record for GPK sales, but shatters it. The previous high was last year’s On Demand Holiday set, which sold 500 less copies. While the political sets from years ago did not sell well, that doesn’t appear to be the case with this year’s election. You can expect political online sets to continue at a steady pace at least through the presidential election.