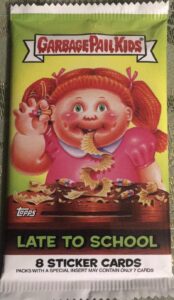 In the first post we looked at how many packs/boxes/cases were produced of 2020S1 Garbage Pail Kids Late to School. Here’s a review of what we came up with.

So how many of each type of card was made? We can’t figure it out for every type of insert or parallel. Some card types we don’t have enough information. Other times however, Topps is nice enough to tell us exactly how many of a card was produced. Like previous sets, Topps has continued to number many card types. This means we already know most of the parallel and insert numbers already! Makes this post a lot easier! We know Blue /99, Red /75, and Gold /50 for the parallels, and Relics /100 and Autos /35! One important note, for this set Topps has raised the print run on the artist autographs. They are now /35, previously they were /25.

Let’s take a look at these numbers compared to previous series. Not surprisingly Black borders are slightly higher. This is because production is also slightly higher on Collector boxes. The number that stands right out is the Yellow borders. Topps moved the Yellows to Blasters this time. Blasters are produced much higher than Retail Display boxes. This means the print run of the Yellows is far higher than in the past. Last series 2019S2 was only 30 per card. This series we are up around 250 per. Should be much easier to find the Yellow border you are looking for. Finally, because we don’t have Fat Pack and Retail display numbers broken out, we are unable to determine Green and Purple borders this time. You can assume the production is similar on the Greens compared too 2019S2. However, the Purples will be about 1/2 of what 2019S2 had. If you remember, Topps messed up and included 2 purple per Fat pack last release. This series was back to 1 per fat pack, so assume purples are about 1/2 of last series. 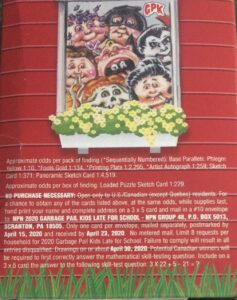 Wacky Package Parodies are very close in production to the Collector box insert of the 2019S2 set. This is because there are 10 cards in the set, compared to 9 last time. Class Superlatives also comes in very close to the insert set from Blaster boxes in 2019S2. We are unable to determine the print run for the GPK Mascots or Faculty Lounge because we weren’t able to break down the pack production of Retail Display and Fat Packs. The lunchboxes are interesting. Every case I saw was packed the same, 3 blues, 2 purples, 2 greens, and 1 orange. Not sure why Topps decided to short print the Orange ones. But those will be tougher to locate as collectors are realizing.

Once again if you want a plate Collector packs are the easiest option. Although a large amount of plates are in retail packs, you just have to open a bunch. Because we can’t breakdown Fat Pack and Retail Display pack numbers were can’t double check out pack totals. But once again the numbers for plates will be very similar to 2019S2.

The bottom line is this, the last two retail sets have been hugely successful for Topps. It couldn’t come at a better time. 2020 will be a year long 35th anniversary celebration, with the year ending with the 35 anniversary set. There will be ample licensed merchandise items debuting from new and old companies alike. Topps stands to make more money off of GPK in 2020 that they have in many, many years.

Not quite as high as the 25,000+ sets from 2019S2, but still a lot of base cards out there! Collectors will have no problem putting this set in their collections!