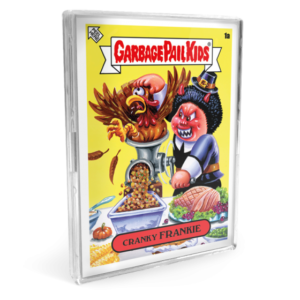 Collectors were stuffing themselves with GPK before the holidays begin! It took just three days for the latest On Demand GPK release to sell out. Today Topps officially revealed the print run for On Demand #22 Garbage Pail Kids We Hate the Holidays. The set sold 1304 copies. This sets a new record for online set sales. This set breaks the record just set with the GPK x NYC Takeover set. Based on sketches completed by artists there should have been a few more sets sold. However, Topps is probably holding back a handful of sketches for replacements. With a print run of 1304 base sets it puts the parallel print runs at; 195 green, 130 red, 65 snowflake, and 130 of each 5×7 poster. Collectors can expect the On Demand formula to return in 2020.