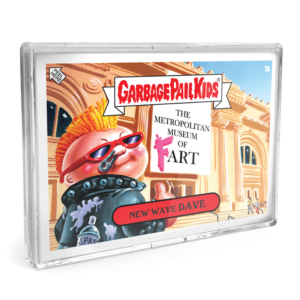 Fresh off this year’s New York Comic Con, Topps is now selling their On Demand #18 2019 Garbage Pail Kids X NYC Takeover set online. The set is exactly like what was sold at NYCC, without the promo card. The 20 card set features 10 new pieces (with a/b versions) of artwork completed by Joe Simko. In addition to the base set, collectors also receive 3 green parallels, 2 pink parallels, 1 C name card, and a 1:2 chance at a sketch card. The set sells for the same price as NYCC at $40. Shipping is free when choosing the SmartPost option. Purchases are limited to 50 sets. The sets are available on topps.com for 7 days or until sold out.

Topps had sold out of sets pretty quickly at NYCC according to collectors attending the event. Topps only brought a limited number of sets to the con, while holding back the rest for online sales. As part of the online listing Topps did reveal the names of the 16 artists that did sketches for the set. Sketch artists are; John Brewer, Neil Camera, Jasmine Contois, Dan Contois, Sebastian Cortez, Jason Crosby, Joe Grotesque, Joey Fitchett, K GRiMM, Dennis Gortakowski, Robert Jimenez, Rich Molinelli, Anthony Skubis, B. Nygma, Floydman, and Gavin Williams. Artists were asked to complete 52 sketches, but some completed less. I’ll update this article with more details when available.

Here is a checklist for the set in addition to some pictures of the cards.