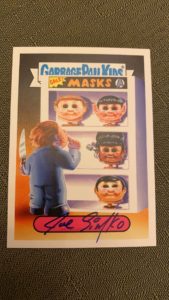 Another day, another new Garbage Pail Kids promo card. Collectors attending the Joe Simko signing at the Topps booth today were treated to a new promo card based off of the new 2019S2 Revenge of Oh the Horror-ible set. The card is a reprint of the Slasher #7a Meditating Michael card. The back tells collectors they’ve received an exclusive New York Comic Con autograph card. One has been posted on eBay with the seller claiming only 50 copies of the card were passed out. Who knows, maybe more will surface this weekend at Topps’ booth. After two days of surprises what will this weekend bring at NYCC? 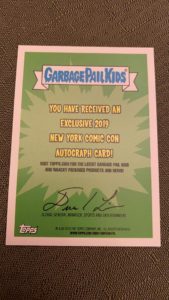 One Reply to “Another Garbage Pail Kids Promo At NYCC”