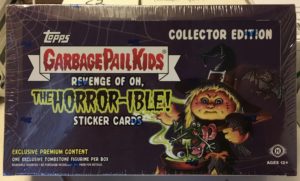 With just one day before release day Collector boxes of 2019 Series 2 Garbage Pail Kids Revenge of Oh the Horror-ible are starting to surface. Thanks to Mikee Friesen for pictures of the collector box and odds. Much like with Retail, the odds appear to be tougher than previous sets, and production higher. However, it might not be as bad as it seems. The odds for the red and blue parallels appear to be overstated by double as Mikee pulled 5 reds and 7 blues from his box. Yes that’s a small sample size, but overstating the odds by double has been something Topps has been doing on and off for a while now. The other unknown is what the Faux Character Relic is. I thought that might be the figures, but they have odds on the pack. So there might indeed be patches once again in the set. I’ll have much more on that and production numbers in upcoming articles. Here are the Collector pack odds.