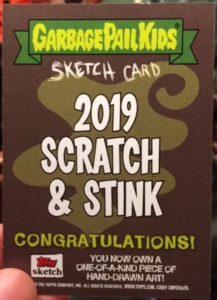 Last last night one of the Garbage Pail Kids sketch artists posted on Facebook previously unseen sketch blanks. The blanks appear to belong to an upcoming online offering from Topps. There aren’t many other details that have been revealed about the set. Based on posts from many former sketch artists, only a select number of artists were invited to complete sketches for this set. The title and/or theme of the set appears to be 2019 Scratch & Stink. Will the cards have a scratch & sniff concept to them? Topps previously offered scratch and sniff cards during the ANS sets. The blanks have a light green name plate on the front, with a light/dark green banner. The backs have a camo color scheme on the back with the title 2019 Scratch & Stink. This is the first time sketch artists are being used for an online set, that aren’t also main card artists, since the GPK Classic set almost two years ago. Topps hasn’t revealed any information about the set, including any possible release dates or configuration. Keep checking the Topps online store daily to get your hands on the next online set. 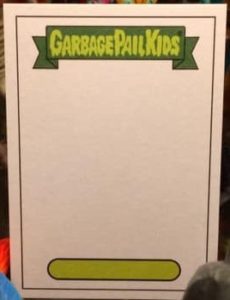