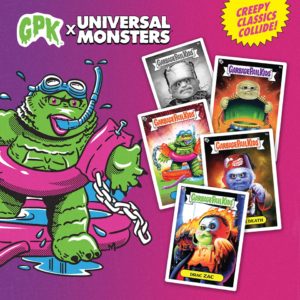 With this year’s San Diego Comic Con only a few weeks away, companies are busy announcing all their goodies launching during the show. Super7 today announced on their Facebook page today a new card set Garbage Pail Kids x Universal Monsters. Super7 owns the license to the Universal Monsters, and now also has a deal with Topps for the Garbage Pail Kids license. The artwork for the set was done by GPK artist Joe Simko. The set looks to have 24 characters to collect according to one of the pictures. The cards appear to be numbered a/b. According to Super7 the set will be available on 7/17 & 7/18 at their San Diego store which is a short walk from SDCC. That means collectors in the area won’t need a SDCC badge to purchase. GPKNews has contacted Super7 to see if these will be available after the show, if they respond we will update the article. For now start making friends with some collectors living in San Diego!