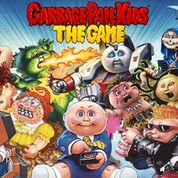 364 days ago Jago Studios and Topps announced a partnership to create the first Garbage Pail Kids mobile video game. Almost one year later the game has been officially released. Today Jago Studios officially announced that GPK the Game has been released to the public. The company originally was shooting for a late 2018 launch. Last October the company held a contest that allowed a handful of people to test the game out. Since then they’ve been fine tuning and making some game play changes over the past few months.  Just this past weekend the company released a brand new 15 second trailer of the game showcasing new characters, graphics, and game play. 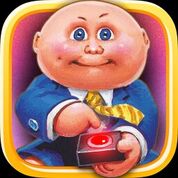 According to the press release, the card collecting and strategy role playing game, is being launched exclusively on the Apple App Store for iPhones and iPad. When first announced, Jago said the game would also be available for Android devices.Jago tells GPKNews that they are working on an Android version of the game, but no release date is available yet. The game is currently on version 1.0.1 in the App Store. The game works on iPhones or iPads running iOS 11 or higher. The game is free to download and play. While you don’t have to purchase anything to play the game, there are options to spend real money in the game. Card packs range from $4.99 -$12.99, while you can also buy extra coins and gems.

As is the case with Apple launches, the game might not be available at launch in your region. You will need to be patient as Apple propagates the game across all regions. See below for the press release, pictures of game play, and the trailer that was recently released.

LOS ANGELES — TUESDAY, MAY 21, 2019— Jago Studios, creator of interactive social entertainment, today announced the launch of Garbage Pail Kids: The Game℠, a card collecting and strategy role playing mobile game which is now available exclusively on the App Store. The game was developed by Jago Studios under license from The Topps Company, Inc., the originator of the Garbage Pail Kids property. The Game features many memorable characters originally seen in the original Topps cards from the 1980s, as well as characters appearing on cards released more recently.

“An entire generation grew up with the outrageous and satirical character art of the Garbage Pail Kids, imagining what the cards would look like if they were to come to life,” said Stuart Drexler, Jago Studios Founder and Chief Executive Officer. “We are excited to bring these 80’s icons to mobile and offer GPK fans entertaining new ways to interact with their favorite characters— now fully animated.”

“When GPK was originally launched back in the day, mobile games or mobile phones did not exist,” says Ira Friedman, Vice President of Global Licensing at Topps. “Thanks to the giant leaps in technology since those early times, our fans can now experience the fun, the thrills, and the visual audaciousness of the Garbage Pail Kids property through their phones— whenever they want.”

Garbage Pail Kids: The Game is free-to-play and available exclusively on the App Store at [VANITY URL]. For more information and to receive updates on the game, visit gpkthegame.com or follow @gpkgame on Twitter, Instagram and Facebook.

Garbage Pail Kids™, the mischievous and over-the-top 80’s icons, are back and ready to battle! Build a team of your favorite cards with original characters released by Topps in the 1980s and beyond. Fully animated like never before, these wacky kids will fight with everything they’ve got— lasers, spray paint, dance moves, nuclear weapons, and anything they can spit, spew, or hurl.

Adam Bomb, Tee Vee Stevie, Smelly Sally and the characters you remember are ready to fight. Pick your favorites to build your crew and unlock rare cards as you progress. Learn quirky skills, find bizarre gear, and level up your outrageous team.

Battle Till You Barf

Create the best team of Brawlers, Tanks, and Support to be victorious. Face off against rival squads in turn-based RPG combat. Deploy attacks and abilities like Roy Bot’s Crazy Cannon, Hot Scott’s Piercing Poke, or Brainy Janie’s Mind Meltdown to take out your enemies.

Manage your resources and decide when and how to train your crew. Tactically equip your team and unlock new skills to enhance their power. Bring your strongest squad to battle and upgrade your characters to win as challenges get tougher.

Get a veritable cornuCRAPia of loot when you win fights! Collect junk like the lovely Scumbrella, the slippery Hypodermic Noodle, and the ever-trusty Slap Stick to increase your power. Train and equip your team to become the baddest kids on the block.

Challenge other players and prove your skill in the PVP Chunderdome: Two players enter, one player heaves!  Earn bonus daily rewards and climb the leaderboard to GPK glory.

Dive in the dumpster, take out the trash, and come play in the wild and crazy Garbage Pail Kids universe!

ABOUT THE TOPPS COMPANY