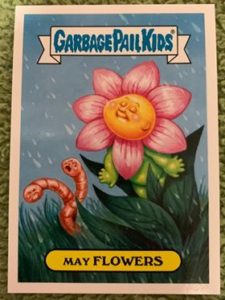 Last weekend collectors from all over gathered for the biannual Philly Non-Sports card show. This was the second show in a row where Garbage Pail Kids and Wacky Packages were in the spotlight. For GPK collectors the show didn’t disappoint. The highlight for many was the attendance of seven former and current GPK artists. The show also sports dozens of dealers selling all sorts of non-sports cards, allowing collectors to pickup a number of items for their collections. Anyone attending the Saturday night dinner also received two officially licensed Topps cards. The GPK card, #3 May Flowers, was painted by Layron DeJarnette, while the Wacky Packages card, #4, was painted by Chenduz. Collectors also received a special card from Tom Bunk at the dinner. Pictures of the dinner cards are below.

While GPKNews wasn’t in attendance, show promoter Roxanne Toser was kind enough to send in her review of the show. The Toser’s have been running the show for years now, and in addition have been one of the largest non-sports dealers in the country. At the dinner the Toser’s were given a special tribute. Aaron Booton, Jeff Zapata, Harris Toser and Marlin Toser all shared the many wonderful things Roxanne has done for the non-sports community. She was presented with a beautiful desk clock, inscribed with an Adam Bomb photo. Marlin was also presented with a large metal “Unsung Super Hero!” card. The sentiment she shares in the article is one I hear from everyone that attends the show. The show is a family atmosphere, where collectors of all types can meet artists, hand out with like minded friends, and add to their collections. Thanks to Roxanne for sending along the review!

I just can’t help but rave about the recent Philly Non-Sports Card Show held in Allentown, PA on May 4 and 5. This was the second of two shows with the theme of Wacky Packagesand Garbage Pail Kids. The first show was held in October of 2018 and featured artists Layron Dejarnette, Chad Scheres, Smokin’ Joe, Joe Simko, David Gross and Tom Bunk.

The featured artists at the May show were James Warhola, Tom Bunk, Chenduz, Jeff Zapata, Mark Pingatore, Fred Wheaton and Neil Camera. In addition, Neil’s daughter Halsey was set-up with her father and Lily Mercado, Jeff’s sister was set-up with him on Sunday.

On Friday night, we had dinner at the Airport Hilton Garden Inn (host hotel) with our helpers and the artists who were booked into the hotel. Two special helpers this time were our eldest son, Barry and his wife Jody. This was a very relaxing end to a long day which included getting the room at the Merchants Square Mall ready for the show. Most of us were up at an early hour.

Saturday was the first day of the show and we had the largest attendance in recent years. The line was very long waiting to get in. Everyone received a packet of promos and a ticket to win additional promos and prizes at the Cryptozoic booth. Cryptozoic is a California-based company and a great supporter of the show. The Faerie Metal Company attends regularly from Las Vegas and brightens up the room with their shiny small and large cards. Tom Lichman of Sidekick is another manufacturer who regularly supports us.

On Saturday evening, there was a dinner for 64 people. The dinner was sold-out, as was the dinner in October. At the October dinner, attendees were given two special promos drawn by Joe Simko and Fred Wheaton. The Halloween-themed promos were licensed by Topps. Another special dinner promo was done by Tom Bunk. This time, the Topps promos were drawn by Layron Dejarnette and Chenduz and had a spring theme. In addition. Tom Bunk supplied another dinner promo. Right before you entered the dinner room, you were greeted with a banner “Welcome to the Ratz Where Delicious Garbage is Served.” The buffet pasta bar dinner was, indeed,  delicious and included Blunder Bread (garlic bread), Goonman’s Looney Noodles (pasta bar/rotini), Raw Goo Sauce (alfredo sauce), Bigtumi Spaghetti Sauce (meat sauce) and Hostage Cakes (cupcakes). There were numerous prizes donated by Creepy Co., Topps, Joe Simko and Roxanne Toser Enterprises.

Every dinner table had a vase showing the four cards distributed at the two shows on the four sides. Inside the vase were flowers and the large head mounted on chop sticks of each of the artists, with the eighth table showing the head of George Wright who is an artist at every show and a long-time Wacky Packages buddy of mine. I made these center pieces and really enjoyed getting them ready. It was fun to tell the artists they would recognize where they were supposed to sit because we had asked for head shots but never told them why.

At the dinner Aaron, Jeff, Harris and Marlin all said wonderful things about me and my contributions to the hobby. I was presented with a beautiful desk clock, inscribed with an Adam Bomb photo. Marlin was presented with a large metal “Unsung Super Hero!” card (much deserved).

We surprised Aaron Booton by putting him on one of our special red-bordered Philly Cards given out at every show. Jeff Zapata has a short video on Facebook showing Aaron’s surprise when we gave it to him on Friday evening. Some other very special promos were Brent Engstrom’s 1b Roxanne Recon card (the October 1a version was titled Toser the Destructor and had a different colored background), Neil Camera’s April  Shower (Saturday promo) and May Allergy (Sunday promo) plus Del Monkey Fruit Cocktail (Sunday promo). All attendees also received a Horrible Kids promo from Mark Pingatore at both shows.

The Philly Non-Sports Card Show features many other card titles besides GPKand Wackysso even though these titles cannot always be the central theme, you will always find cards and related memorabilia at the shows. Hope to see many of you at future shows. The next one is only five months away on October 19 and 20!