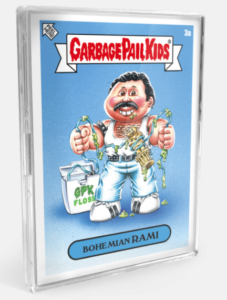 Award season ended last weekend as the yearly Academy Awards show passed out the Oscars. After skipping the first batch of awards shows, Topps released an online exclusive set based on this years Oscars. Today Topps revealed the print run for the 2019 Garbage Pail Kids Not-Scars online set. In total the set sold 375 copies. While the number is down from the recent On Demand releases, it’s a great number for an awards set. In fact this is the highest selling awards set Topps has produced. Collectors quickly sold out recent On Demand releases such as Valentine’s is Gross, and the GPK Coloring Book. This set did not contain any sketches or parallels and thus was not limited. The set was for sale the entire 7 days on topps.com. With the set being a surprise launch it will be interesting to see where Topps puts their online focus the remainder of the year. We most certainly will see additional On Demand sets, but with record numbers for the awards set, surely more of those types of sets will be on the way?