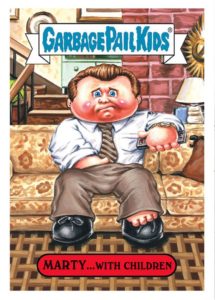 We are just three weeks away from the next Gross Card Con. This year’s show is part of the Vegas Toy Con, held at the Westgate Casino in Las Vegas from March 1-3. Once again, the show will offer an exclusive card set created by the artists. That’s not all! There will also be Scavenger Hunt cards, and an official Topps promo card available at the show. Clint Coleman from GPK & Wacky Warehouse produces all the show exclusive cards. He shared with GPKNews all the details around this year’s cards. Read on to find out what will be offered.

As announced last week by artist David Gross, there will be an officially licensed Topps promo card for the first time at Gross Card Con. The Married With Children parody will come in both an a and b version. Show goers will have a few options to obtain these cards. 1) VIPs will automatically receive both versions of the card at their VIP Saturday breakfast. 2) Purchase the glossy show exclusive set (see details below) and receive both cards. Each set purchased will receive both cards, there is a limit of two sets per customer, per day of the show. 3) Attend the artist Q&A session. The first 50 people to attend the Q&A session will receive one card, (a or b). The artist Q&A is scheduled to take place at 11:00 AM Saturday at the show.

This year’s show exclusive set will be an extra large 24 card set featuring artwork from 12 different artists. The set has two themes, 12 unpublished gags, and 12 toys. David Gross did three paintings for the set, Layron DeJarnette did one, and Tom Bunk, Brent Engstrom, Joe Simko, Joe McWilliams, Mark Pingitore, Jeff Zapata, Michael Barnard, Chenduz, Chad Scheres, and Jon Gregory did two each. The set will be available in two different versions, Glossy and Canvas. Each set will be limited to 100 available to purchase at the show. The print run of the Glossy set is 250, with the remaining cards being given to show promoters, artists, and to be sold after the show. The Glossy set will cost $50, while the Canvas set will be $40. There will be a special show promotion, you can purchase both sets for $80. VIP holders will receive a Glossy set as part of their package. While the Canvas set won’t come with any extras, the Glossy set will come with the Topps promo cards and a chance at pulling a special show redemption. Redemptions will fall roughly 1:5 sets, and include a chance to get a sketch card from one of the 12 artists from the set, merchandise credits from GPK & Wacky Warehouse, or a large medal art card printed by Faeire Metal company. Only glossy sets purchased at the show will receive the Topps promo cards and have a chance at a redemption. Sets will be available for purchase from the GPK & Wacky Warehouse booth at the show. The artists have revealed some of their cards for the set. Here is a gallery showing many of the cards.

Finally, there will be a GPK Scavenger Hunt during the show. Four Topps sketch artists attending the show, Shane Garvey, Barry Nygma, David Acevedo, and Shawn Cruz all painted a card to be used during the hunt. The four cards will be hidden around the show venue throughout the weekend. The artists will also have copies of the cards available at their booth. VIP holders will also receive all four cards in their package. Here are a couple of examples of the scavenger hunt cards.

These are just the cards show promoters have planned for the show. Each artist has so much more planned for this year’s Gross Card Con. GPKNews will have another article just before the event showing many of the goodies available from each artist. If you haven’t booked your room yet, now is your chance!