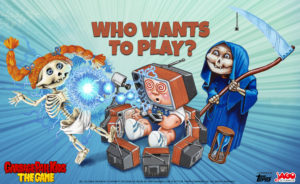 Jago Studios announced today they are offering a contest for three people who are interested in testing and playing an early version of the GPK The Game. GPK fans can fill out a survey at gpkthegame.com to enter the contest. The company says winners will be chosen based on their fandom and experience. The deadline to enter the contest is 10/26. Winners will be announced on 10/31. See below for complete release details.

The company also said they will release a new 30 second trailer to the public on 10/31. Anyone signed up to their mailing list will get to see the video on 10/30.

As part of the release Jago says the game will now come out in early 2019. It will be available in both the Apple App Store and the Android Google Play store.

LOS ANGELES— THURSDAY, October 4, 2018— Jago Studios, the independent entertainment studio behind Garbage Pail Kids: The Game℠, today announced it is offering an exclusive opportunity for three members of the community to gain advanced access to the mobile game coming in early 2019. The three “community testers” will be chosen based on their fandom and experience, via survey from Jago, which anyone 18 and older can submit at gpkthegame.com through October 26, 2018.’
The winners of the contest will be announced on October 31, when Jago Studios will also release a new 30-second gameplay trailer. A private link to the trailer will be emailed to people who subscribe to game updates at gpkthegame.com by October 30, 2018. The three chosen players will have several weeks to play an early version of the game and will have a video call with the Jago Studios team to talk about the game, ask questions, and offer feedback.
“Fans of the notorious GPK characters, RPG players, card collectors, and mobile game enthusiasts are all encouraged to enter,” said Stuart Drexler, Jago Studios founder and chief executive officer. “We’ve received many, many requests from the community to be early game testers, so we are excited for this opportunity as we build this game around the beloved Garbage Pail Kids brand.”
Garbage Pail Kids: The Game is an upcoming mobile card-battling RPG featuring iconic characters from the collectible trading cards and stickers originally issued by the The Topps Company in the 1980s. Currently in soft launch, the free-to-play mobile game will be released worldwide on the App Store and Google Play in early 2019. For more information and to receive updates on the game, visit gpkthegame.com or follow @gpkgame on Twitter, Instagram and Facebook.
0 shares